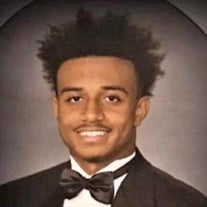 The Legacy of Adarius Davon Rich Grovetown, GA - Adarius Davon “AD” Rich, 22 years old, of Grovetown, Georgia, entered into rest on December 16, 2021, in Augusta, Georgia. Funeral services will be held at 2:00 PM on Thursday, December 23rd, 2021 at Thomas Poteet & Son Funeral Directors with Pastors Jamaal & Tiara Francois of All About Change Ministries, officiating. Burial will follow at Hillcrest Memorial Park. Pallbearers will be Cameron Barnes, Cameron Jones, DaQuan Joe, Cordarius Scott, Timothy Scott, and Zion Williams Adarius was born in Augusta, Georgia, to Bernadette and Daniel Rich on February 5th, 1999. He was a graduate of the Academy of Richmond County class of 2017. During his years at ARC, he played as both a wide receiver and cornerback for the ARC Musketeers football team, jersey # 09. He was involved in the Leukemia and Lymphoma society, making many contributions, and planning to submit the story of his journey to serve as a beacon of hope for others fighting similar battles. After completing high school, Adarius had aspirations of becoming a registered nurse to serve and help those in need. He was committed to this path and enrolled as a student at Georgia Military College. He had a courageous fight against acute myeloid leukemia in the last two years of his life and beat the odds in multiple instances during those times. He did not let the throws of illness impede his determination or focus. Adarius continued to pursue school and even worked two jobs while battling cancer. He possessed an enduring spirit that could not be extinguished. He always had a heart for others, whether it was constant affection to his family, fellowship, and advice to his peers, or serving as an embodiment of inspiration to others fighting the same battle. Adarius was nothing short of wise, compassionate, valorous, and kind. His huge heart for others will continue to live on and provide strength and comfort for everyone's lives he has impacted. The radiant smile of this man will continue to live on in all of our hearts. Adarius is preceded in death by grandmothers Linda Lee Brown and Brigitte Waltraud Magness Rich; and niece Averi Danielle Rich. He is survived by four brothers: Austin Daniel Rich (wife Khadijah Rich), Braden Carl Rich, Daniel Carl Rich III (wife Baylee Rich), and Van-Erik Rich; niece Ava Lynne Rich; parents Daniel and Bernadette Rich; grandfathers Lewis Brown and Daniel Carl Rich Sr; grandmother Sally Rich; and a host of aunts, uncles, and cousins. Thomas Poteet & Son Funeral Directors, 214 Davis Rd., Augusta, GA 30907 (706) 364-8484. Please sign the guestbook at www.thomaspoteet.com

The family of Adarius Davon Rich created this Life Tributes page to make it easy to share your memories.

The Legacy of
Adarius Davon Rich

Send flowers to the Rich family.