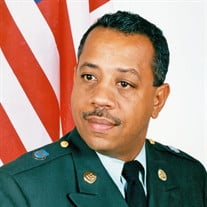 Pastor Alfred Lee McClendon, Jr. was born July 13, 1957, to Patricia Diane Paul-McClendon and Johnny Samuel Wright, Sr. Our Heavenly Father saw fit for Alfred (affectionately known as Junior and Mac) to be born to two earthly fathers. Very early on, Alfred Lee McClendon, Sr. took on the fatherly role in young Junior’s life. He was born and raised in Colorado Springs, Colorado, where he fostered many emotional ties and connections with numerous beloved friends and family. He was called home on April 20, 2022. Mac met the love of his life Kelly Anne McClendon on April 2, 1999, and they married on June 4, 1999. Mac had an array of hobbies and interests throughout his lifetime that would include dog training and breeding (he had an undying love for canines and other animals), weaponry, large trucks, music, and gaming, just to name a few. Mac’s primary interests and passions were being a servant to the Kingdom of God; preaching and teaching, being a doting and devoted husband to his lovely wife, Kelly of 23 wonderful years, and a proud father and grandfather to his seven (7) children and 26 grandchildren. While in Colorado Springs, God called Mac to preach His Holy Word at the tender age of 15. Mac traveled the world, teaching the Good News of Jesus Christ. He was licensed by Grace of God Baptist Church Ordaining Council on February 27, 2005, to preach the Gospel. Mac left Colorado to join the United States Army at 19 years of age. He served in both the active duty and Florida Army National Guard. While in the National Guard, he served as a Senior Interrogator, Interrogations Instructor, and Army Counterintelligence Agent. While serving in the Florida Army National Guard, Mac joined the Homestead Police Department (Miami Dade County) and later retired as one of the highest decorated detectives in the Homestead Police Department. He was awarded the Chief’s Gold Medal of Valor, two Life-saving awards, Officer of the Year in 1995 and several Officer of the Month awards during his tenure with Homestead. Mac was also nominated for one of the National Association of Police Organizations’ first Top Cop awards in Washington D.C. The community of Homestead adored Mac and he indeed adored his community. He not only took to heart protecting and serving his community, but he formed life-long bonds with the citizens as well as his colleagues. As a natural born protector and defender of justice, policing was not only Mac’s career but a way of life and his passion. In 2007, Mac and his family relocated to Augusta, Georgia. He served as an Investigator in the Sheriff’s Office in Augusta. Mac also established Heavenly Acres, dedicating 65 acres to dog training and boarding which is licensed by the State Department of Agriculture. Mac worked with some of the top dog handlers and trainers in Mexico, France, and the U.S., and had over two decades of dog training experience, specializing in problem solving and rehabilitating canines. Pastor Alfred Lee McClendon, Jr. was predeceased in death by his mother Patricia Diane Paul-McClendon; his fathers Johnny Samuel Wright, Sr. and Alfred Lee McClendon Sr.; his sister Selena McClendon-Mills; his brothers Andre Elliot, Robert Elliot, Johnny Samuel Wright, Jr. and Richard V. Palomba. Pastor Alfred Lee McClendon, Jr. leaves to celebrate his life: wife Kelly Anne McClendon. Children: Damone Brown (son) & wife Marleanda; Bobby Lee McClendon (son); Alfreda Leesha McClendon (daughter) and fiancé Edgar; Irving Rios Torres III (son) and wife Inez Maria; LeAirra Jean Moreno (daughter) and husband Oscar; Ben Dante’ Berrios (son); and Tiffany Treasure Mills (niece). 26 Grandchildren: Joel Brown, Gracelyn Brown, Micah Brown, Aaron McClendon, JaVon Trigoso, Tauzhanae Harris, Aaron McClendon, Jerome Williams, Bri’Onna McClendon, Andreas Williams, Brandon McClendon, Paige McClendon, Romell Williams, Amaunie Olmeda, Christian McClendon, MiKyle Jordan Harris, Marcus Jamaal Harris Jr., Denym Arden Nixon, Yanaila Torres, Elijah Eastman Torres, Lexi-Elaina Torres, Liliana Marylyn Moreno, Oscar Moreno III, Kataleah Moreno, Penelope-Jade Kelly Moreno, and Calliope-Jean Zoe Moreno. Sisters: Sandra Bailey and husband John and Linda Brooks and husband Donald, Rebecca Mauler and Roberta Morgan. Stepmother: Gretchen Wright The funeral service will be held Friday, April 29, 2022 at 11:00 A.M. in the chapel of Thomas Poteet & Son. Interment will follow in Westover Memorial Park. The family will receive friends Thursday evening from 6:00 until 8:00 P.M. at Thomas Poteet & Son Funeral Directors, 214 Davis Rd., Augusta, GA 30907 (706) 364-8484. Please sign the guestbook at www.thomaspoteet.com Pastor Alfred Lee McClendon Jr. will be deeply missed by all who knew him. In Memory of Our Dad in Heaven If we could write a story It would be the greatest ever told. Of a kind and loving father Who had a heart of gold. We could write a million pages. But there’s one thing we would say, Just how much we love and miss Him every single day. We know he always loved us. We may be hurt, but we won’t be sad. Because he’ll send us down the answers. And he’ll always be our DAD.

The family of Alfred Lee McClendon Jr. created this Life Tributes page to make it easy to share your memories.

Send flowers to the McClendon family.