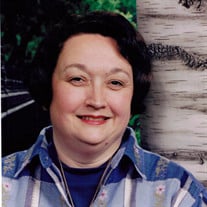 Watkinsville, GA - Alice Elizabeth Hearne Jones, 69, died peacefully in her sleep with her family around her at her home in Twelve Oaks of Watkinsville on Tuesday, July 20, 2021. She was born on March 16, 1952 in Augusta and grew up in Macon from 1960 until leaving for college. She was the daughter of John Hearne and Erma Harrison Hearne. She was married to A. Wayne Jones of Colquitt from 1973 to 2003. She attended Georgia Southern University, graduated from University of South Carolina-Aiken Campus in 1983, and obtained her Master’s in Early Childhood Education in 1999. Alice worked as a teacher starting at JD Lever in Aiken, SC 1983 to 1985, West Bainbridge Elementary from 1985 to 1990, and at Bethlehem Elementary School from 1990 until she retired in 2012. She also worked with her then husband on their side real estate business Honeysuckle Roads, LLC from 1996 to 2003. Upon retirement she became heavily involved with the Oconee County Arts Foundation (OCAF) where she volunteered at their pottery studio from 2013-2018, and had her own small business Pastime Pottery. Alice was a member of Watkinsville First United Methodist Church, a past member of Pilot’s Club International, and was a member of Always Needing God’s Everlasting Love and Support (ANGELS) United Methodist Women’s Circle. She was devoted to her family and was an artist, a master at arts and crafts. Survivors include her daughter, Melissa Jones of Watkinsville; son Marshall Jones of Canton; daughter-in-law Casandra Jones of Canton; sister Janice Hearne Davison of Evans: brother-in-law, Vince Davison of Evans: three grandchildren, Piper Jones, Grayson Jones, and Bryce Jones; and two nieces Christy Davison Clarke and Lindsey Davison Brandenburg. She was preceded in death by her grandparents, and parents. The graveside service for Ms. Jones will be 2:00 PM Saturday, July, 24, 2021, at Westover Memorial Park Cemetery in Augusta. The family requests that masks be worn. In lieu of flowers, please make a gift donation in her memory to the Food Bank of Northeast Georgia, www.foodbanknega.org. Thomas Poteet & Son Funeral Directors, 214 Davis Rd., Augusta, GA 30907 (706) 364-8484. Please sign the guestbook at www.thomaspoteet.com.

Watkinsville, GA - Alice Elizabeth Hearne Jones, 69, died peacefully in her sleep with her family around her at her home in Twelve Oaks of Watkinsville on Tuesday, July 20, 2021. She was born on March 16, 1952 in Augusta and grew up in Macon... View Obituary & Service Information

The family of Alice Hearne Jones created this Life Tributes page to make it easy to share your memories.

Send flowers to the Jones family.