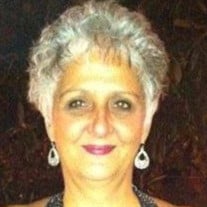 On October 9, 2021, Angela Adcox Greene, affectionately known as “Gigi”, entered into her eternal life after a short illness at Doctor’s Hospital in Augusta, Georgia. She was 64 years old. Born on New Year’s Eve in Greenville, South Carolina, Angela was the daughter of John Adcox and the late Delores Adcox. She was a graduate of Butler High School and became a Licensed Practical Nurse, specializing in the care of dialysis patients. She also worked at the Elizabeth Arden counter at Dillard’s, where she enjoyed making her customers feel young and beautiful. Angela eventually went to work for the Center for Primary Care in Augusta, GA and retired from there in 2020. She loved her CPC family so much. Angela was a member of Christ the King Lutheran Church, where she sang so eloquently and beautifully in the choir. Angela enjoyed spoiling her grandchildren, cooking, singing, and was known for being the life of the party. Her favorite memories were spending time with family, especially at dinners cooked by her mom, going to Edisto Beach, and vacationing with her friends from CPC. In addition to her parents, Angela is survived by her loving son and daughter-in-law Steven (Allison) Greene, grandchildren Sebastian Greene and Sophia Greene, her brothers and sisters-in-law Chris (Susie) Adcox and Michael (Patsy) Adcox, her aunt Lynne Cheek, and her devoted cousin whom she loved like a sister Diane Morris. She is also survived by her nephews and nieces Rachel (Mikey) Prothman, Dallas Adcox, and Michael Prothman. Angela was preceded in death by her nephew John Michael Adcox. Honorary pallbearers are her family and friends from the Center for Primary Care. If so desired, memorials may be made to the Children’s Hospital of Georgia (www.augustahealth.org/give/childrens). Angela’s family would like to extend their deepest gratitude to the staff at Doctor’s Hospital, most especially in the ER, ICU and 5th floor, for the loving care they gave Angela in her final days. A memorial service will be held Tuesday, October 12, 2021 at 2:00 P.M. in the chapel of Thomas Poteet & Son. The family will receive friends one hour prior to the service, beginning at 1:00 P.M., at Thomas Poteet & Son Funeral Directors, 214 Davis Rd., Augusta, GA 30907 (706) 364-8484. Please sign the guestbook at www.thomaspoteet.com

The family of Angela Adcox Greene created this Life Tributes page to make it easy to share your memories.

Send flowers to the Greene family.