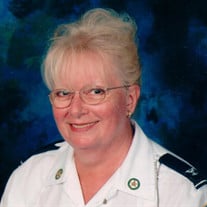 Barbara Jean Lantz North Augusta, SC, Formerly of Hudson, FL – Barbara, age 81, wife of the late James Miles Lantz, went to be with the Lord on Wednesday, September 8, 2021, at home with her loving family. Mrs. Barbara Jean Lantz, daughter of the late Enoch Amos Hill and Florrie Mae Smith-Hill, was born April 22, 1940, in Detroit, MI. At the age of 17, she met her true-love, James Lantz and was later united in holy matrimony on December 6, 1957, just before James left to serve his country in the US Airforce. Their marriage was blessed with four children. Mr. Lantz preceded her in death on June 3, 2017. The Lantz family had many homes throughout the country and even lived abroad for a period of time while Mr. Lantz continued to serve his country. Barbara had fond memories of her time in England and often shared stories of their life there. While she was raising her children, she was also able to work and became a skilled key-punch operator for many years Prior to her relocation to South Carolina in 2016, where she resided with her son Michael, her daughter-in-law Theresa and their two dogs Bella and Madison, Mrs. Lantz was part of the Pasco County Sheriff’s Office Security Patrol where she served for almost 30 years, holding many roles including President of her unit which was responsible for neighborhood watch programs and crime prevention. She patrolled neighborhoods, conducted public speaking sessions providing education to citizens on how they could do their part in crime prevention and became trained and certified as part of the Community Emergency Response Team (CERT) for Pasco County. Barbara was also a significant part of the annual planning of a thank-you picnic held for the entire security patrol team. She was responsible for working with local businesses to garner support and donations to thank each of these volunteer officers. Barbara enjoyed gardening, bird watching, knitting, sewing and crafts of all kinds. She enjoyed spending time with family and friends and loved talking and reminiscing. She was quick-witted and always up for a good joke. Barbara’s beautiful life will forever be cherished in the lives of her children, Deborah Gawne (Randy), Patricia Gougeon (Charles), Cindi Lantz–Quigley and Michael Lantz (Theresa), 9 grandchildren, 12 great-grandchildren and 4 great-great grandchildren and a sister, Edna Mudry. A memorial service will be held Monday, September 13, 2021, at 2:00 P.M. in the chapel of Thomas Poteet & Son with Chaplain Patricia Dickerson officiating. Inurnment will be held at a later date in Bushnell Florida National Cemetery. Memorial contributions may be made to St. Jude Children’s Research Hospital, 501 St. Jude Place Memphis, TN 38105 USA / [email protected] Thomas Poteet & Son Funeral Directors, 214 Davis Rd., Augusta, GA 30907 (706) 364-8484. Please sign the guestbook at www.thomaspoteet.com

The family of Barbara Jean Lantz created this Life Tributes page to make it easy to share your memories.

Send flowers to the Lantz family.