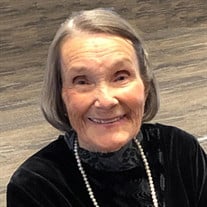 Evans, GA - Barbara Seitz Williams passed away on October 16, 2021. She was born in New York, New York, but moved to Augusta, Georgia when she was two years old and remained a lifelong resident. She was the daughter of William Frederick Seitz Jr. and Ruth Morehouse Seitz. Barbara graduated from Tubman High School in Augusta. She attended Wesleyan College for two years and transferred to the University of Georgia and graduated in 1951 with a Bachelor of Science degree in Education. She was a member of Alpha Delta Pi Sorority at Georgia. Before going back to teaching fourth grade at the Episcopal Day School in 1969, she stayed home and raised her three children. She retired from the Episcopal Day School in 1987 and touched the lives of many students. Her students remember her calling them “precious darlings” and the importance of having an attitude of “Esprit De Corps”. She was a wonderful mother to her three children. Her grandchildren and great grandchildren brought her much joy, and she always kept an interest in their activities. She loved flowers and always kept a flower garden or flower pots. When she and her husband moved to Brandon Wilde she was active volunteering in many ways and loved preparing cut flower arrangements for the dining room tables in the Colonnade and Pavilion areas of Brandon Wilde. Barbara was a member of the Junior League of Augusta and served as a Sustaining Member. She and her deceased husband, Alan Betz Williams, were charter members of Covenant Presbyterian Church on Walton Way. She served the church faithfully in many different ways over the years. She was predeceased in death by her husband of 61 years Alan Betz Williams, her parents William Frederick Seitz Jr. and Ruth Morehouse Seitz, her brother William Morehouse Seitz and niece Carol Seitz Nelson. She is survived by her three children, Gretchen Williams Middleton of Augusta, Georgia, Frederick Gantt Williams (Donna) of Spartanburg, South Carolina, and Briton Seitz Williams (Jenny Lynn) of North Augusta, South Carolina. Grandchildren Charles Gantt Williams (Lauren) of Jacksonville, Florida, Robert Jackson Middleton III (Lindsey) of St. Simons, Georgia, Alan Lee Williams of Spartanburg, Jessica Middleton Reynolds (Cameron) of Atlanta, Georgia, Margaret Ann Williams Kantz (Michael) of North Augusta , South Carolina, Walker Frederick Williams ( Emily) of Mt. Pleasant, South Carolina, Hampton Seitz Williams of Jacksonville, Florida and Bankston Burnette Williams of Charlotte , North Carolina. Great Grandchildren Robert Jackson Middleton IV and Lilah James Middleton of St. Simons Island, Georgia as well as numerous nieces and nephews. The family wants to thank the staff and CNA’s at Brandon Wilde, and to her various independent care givers especially Rhonda Pitts and Elizabeth Stone who treated her with care and dignity over the last few years. In lieu of flowers, a memorial may be made to the Covenant Presbyterian Preschool. A Memorial Service will be held at Covenant Presbyterian Church, 3131 Walton Way, Augusta, Georgia on Saturday, October 23rd at 11:00 AM with visitation to follow at the church. Interment will be private. Arrangements are being handled by Thomas Poteet and Son Funeral Directors, 214 Davis Rd. Augusta, Georgia, 30907 (706) 364-8484.

Evans, GA - Barbara Seitz Williams passed away on October 16, 2021. She was born in New York, New York, but moved to Augusta, Georgia when she was two years old and remained a lifelong resident. She was the daughter of William Frederick Seitz... View Obituary & Service Information

The family of Barbara S. Williams created this Life Tributes page to make it easy to share your memories.

Send flowers to the Williams family.