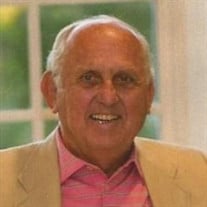 Augusta, GA - Billy Reidel Litchfield, 85, passed away peacefully at home on September 29, 2021, after a brief battle with cancer. He was surrounded by his family at the time of his death. He was born June 23, 1936, in Houston, Texas to Thomas George Litchfield and Jessie Mae Litchfield. Billy was raised in Savannah, Georgia and graduated from Savannah High School in 1955, then earned his BBA in Real Estate from Georgia State University. He served in the National Guard and worked in real estate development as President of The Litchfield Company until his death. Billy was the loving husband to wife, Dianne Carlisle Litchfield, for 40 years. He is predeceased by his parents, and sister, Barbara Attaway and brother, Thomas Litchfield. In addition to his wife, surviving family members include his children: Julia L. Skelton (Chris), Donald R. "Rick" Hopper (Michelle), William B. Litchfield, and Jessica L. Craig (Mark); 9 grandchildren; brothers: George E. Litchfield (Bobbye) and Donald Litchfield (Pat); brother-in-law, Harold Attaway; and sister-in-law: Peggy Litchfield. Billy was well respected in the community and was known to be thoughtful, kind, and generous. He loved life, his friends, his work, and the Georgia Tech Yellow Jackets. He and Dianne enjoyed spending time at the beach and spent many weekends at their farm in Wrens, Ga. He was a member of the Augusta Country Club. Above all else, he loved Dianne and his family. The family would like to thank Vera from Trinity Hospice for all of her love and care. A memorial service will be held in the chapel of Thomas Poteet and Son on Saturday, October 9th, at 4:00 p.m. with Reverend Chuck Courtenay officiating. The family will receive friends one hour prior to the service. A private graveside service will be held in Savannah at a later date. In lieu of flowers, memorial contributions may be made to The Door of Hope Ministry, P.O. Box 2294 Evans, GA. 30809-2294 or the Jud C. Hickey Center for Alzheimer’s, Care,1901 Central Avenue, Augusta GA 30904. Thomas Poteet & Son, Funeral Directors 214 Davis Road. Augusta, Georgia 30907 (706) 364-8484. Please sign the guestbook at www.thomaspoteet.com.

Augusta, GA - Billy Reidel Litchfield, 85, passed away peacefully at home on September 29, 2021, after a brief battle with cancer. He was surrounded by his family at the time of his death. He was born June 23, 1936, in Houston, Texas to Thomas... View Obituary & Service Information

The family of Bill Litchfield created this Life Tributes page to make it easy to share your memories.

Send flowers to the Litchfield family.