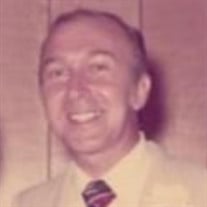 entered into rest Wednesday night, April 14th with his family holding his hand at the home of his son in Sandy Springs, Georgia at the age of only 90 years young. He was a lifelong resident of Augusta, Georgia and most recently enjoyed living with his friends at St. John Towers. Mr. Sweat was always known to wear a smile and offer an anecdote or pun to brighten the day. After slightly exaggerating his age in order to secure work in support of his family, Mr. Sweat began a career in retailing with McClellan’s. He enlisted in the United States Army and served for five years as an MP, Criminal Investigator and attaché in Manheim, Germany. Returning to civilian life in 1953, Mr. Sweat rejoined McClellan’s as an assistant manager in Athens, Georgia. While living in Athens he roomed with a student-athlete of The University of Georgia by the name of Zeke Bratkowski, who had rocketed to fame as an All-American quarterback. With that relationship, Mr.Sweat’s love of UGA football became a lifelong passion. It was also in Athens that Mr. Sweat met and married his first wife, Miss Betty Seagraves, in 1954. After her passing in 1958, Mr. Sweat returned home to Augusta to raise his son with the help of his mother, and to renew his career in retailing. In the years following, he took a chance on going to work for a small local company called Key Wholesale and its owner Mr. Jay Pearlstein for whom he would work until the successful chain Key Catalog Showrooms was sold and subsequently closed. Despite leaving The Academy of Richmond County prior to graduating in order to support his family, Mr. Sweat was an avid reader who valued learning and hard work. These traits enabled him to attain the position of Senior Vice President and Chief of Merchandising. Although he loved the leadership role, he was often heard happily whistling holiday tunes when he was able to return to the store floor to help customers. He would also attribute a great deal of his career success and community service to the woman he married at that time, Jewell Lewis (DeLoach) with whom he shared his life until her passing in 2007. Mr. Sweat also served the CSRA for much of his life, including community service and leadership of the Veterans of Foreign Wars Post 3200 of which he was Commander in the mid-1970s. He devoted his life to family, both in providing love and educational opportunities for children. His love of music, photography, fast cars and reading, especially science fiction, were mirrored in the lives of several of his children and grandchildren. He is survived by children William DeLoach, Barry DeLoach, Bonnie Pitchford of Augusta and Carl Sweat III of Sandy Springs as well as nine grandchildren. In addition to Mrs. Jewell Sweat, Mr. Sweat was preceded in passing by his sons Wayne DeLoach of Augusta and John Sweat of Wellford, SC. A visitation for family and friends is scheduled for 11:30 a.m. Thursday, April 22 at Thomas Poteet and Sons at 214 Davis Rd, Augusta, GA 30907 followed by graveside services at 2 p.m. at Hillcrest Cemetery on Deans Bridge Road. The family would like to thank the staff and caregivers at St. John Towers for not only their wonderful care, but also the love so many demonstrated for my father. Please sign the guestbook at www.thomaspoteet.com

entered into rest Wednesday night, April 14th with his family holding his hand at the home of his son in Sandy Springs, Georgia at the age of only 90 years young. He was a lifelong resident of Augusta, Georgia and most recently enjoyed living... View Obituary & Service Information

The family of Carl Clinton Sweat Jr. created this Life Tributes page to make it easy to share your memories.

entered into rest Wednesday night, April 14th with his family...

Send flowers to the Sweat family.