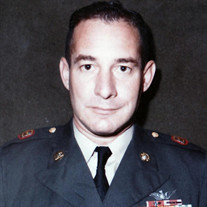 Cecil W. Shipp, Jr. Augusta, GA – Cecil W. Shipp, Jr., 85, entered into rest on Thursday, July 22, 2021, leaving behind his loving wife of 65 years, Alice P. (Kemp) Shipp. Cecil (“Bucky”) was born in1936 in Norfolk, VA, to the late Cecil W. Shipp, Sr, and Tressa B. (Quinn) Shipp. Cecil served honorably in the U.S. Air Force for six years and the U.S. Army for 14 years. He completed several tours of duty overseas, including in Korea and Vietnam. Cecil served a total of 20 years in the military, achieving the rank of Master Sergeant and earning numerous medals and commendations. Following his military career, he retired in Augusta, Ga, where he worked in a broad range of jobs including in industrial maintenance and as an aircraft mechanic. Cecil was a Christian and known for his sense of humor and outgoing personality. He had many hobbies and interests, including chess, fishing, listening to gospel and country music and playing the guitar. In his retirement years, he enjoyed tinkering in his workshop and hanging out with his beloved dog, Pounce. In addition to his wife, other family members include his son, Kenneth W. Shipp (Annette); daughter: Karen T. Shipp; granddaughter: Kimberly S. Busby (Brandon); grandson: Ryan H. Shipp (Laura); and great-grandchildren: Carley, Weston and Evan Shipp. Cecil was preceded in death by his two sisters: Constance Huston (Dewey) and Beverly J. Renigar. Cecil also leaves behind many nephews, nieces and cousins who were dear to him. Funeral service will be held at 2:00 PM on Tuesday, July 27, at Thomas Poteet & Son Funeral Directors, 214 Davis Rd., Augusta, GA 30907, (706) 364-8484. Rev. Larry Harmon will officiate. A brief visitation will be held at 1:00 PM prior to the service. Interment will follow in Bellevue Memorial Gardens, Grovetown, Ga. Please sign the guestbook at www.thomaspoteet.com

The family of Cecil W. Shipp, Jr. created this Life Tributes page to make it easy to share your memories.