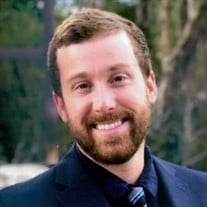 Christopher Hodges, 32, passed away April 22, 2022. Christopher was born on October 21, 1989 in Augusta, GA, the son of Wayne and Elizabeth Hodges. He attended the Hull Knox School of Accountancy obtaining his Bachelor of Business Administration at Augusta State University in 2012. Christopher was goal driven as he never settled for anything less than what he believed he was capable of. Sky was the limit for him. He stormed through his career earning a versatile background in project controls management specializing in power delivery, development, railroad, and data centers. He carried an exceptional work ethic and took great pride in all of his responsibilities. He was truly the "main man" behind the scenes in all of his work contributions. While in the midst of pursuing his career, Christopher proudly held his responsibilities as a loving husband and father. In 2011 during his junior year of college, he married Maxine Shirley, they both met at a youth gathering at their local church. At only 21 and 19, they initiated their journey as a young married couple. Shortly after tying the knot, their family grew substantially welcoming their three sons Cayden Elijah Hodges (2012), Landon Clark Hodges (2015), and Owen Turner Hodges (2017). Christopher always enjoyed a thrill as there was never a dull moment in his presence. He enjoyed staying active and strived to seek the good in any and all circumstances. He was always the "go to" man to the ones closest to him. His hobbies included church, tennis, golf, motorcross, and various around the house projects. Most of all, daily wrestling matches, dance offs, hide-and-go-seek, and intense games of uno with his children. He also enjoyed taking long memorable walks while having sweet conversations with his family. Christopher was a man of logic as he held impeccable deductive reasoning skills. He always sought solutions to every problem while weighing out all positives and the negatives in every aspect of his life and those around him. He didn't just make it to the top, he succeeded. The memories obtained of Christopher will forever be cradled in our hearts. As such, his confidence, will power, and drive will continuously be admired. He is survived by his children Cayden, Landon, and Owen Hodges. Christopher is also survived by his father and mother, Wayne & Elizabeth Hodges as well as his brother Stuart Hodges and sister-in-law Ashley Hodges. His grandfather Charles Blanford and grandmother Ruth Hodges as well as many countless family members. A memorial service will be held Saturday, May 7, 2022 at 2:00 P.M. in the chapel of Thomas Poteet & Son. The family will receive friends one hour prior, beginning at 1:00 P.M., until the time of the service at the funeral home. Thomas Poteet & Son Funeral Directors, 214 Davis Rd., Augusta, GA 30907 (706) 364-8484. Please sign the guestbook at www.thomaspoteet.com

Christopher Hodges, 32, passed away April 22, 2022. Christopher was born on October 21, 1989 in Augusta, GA, the son of Wayne and Elizabeth Hodges. He attended the Hull Knox School of Accountancy obtaining his Bachelor of Business Administration... View Obituary & Service Information

The family of Christopher A. Hodges created this Life Tributes page to make it easy to share your memories.

Send flowers to the Hodges family.