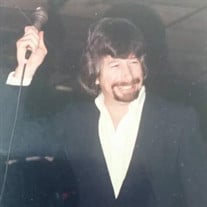 North Augusta, SC - David Edward “Cliff" Carlisle entered into rest during the early morning hours of January 25, 2022. He is now at peace. Cliff was born David Edward Carlisle in Childersburg, AL to Katherine and Woody Carlisle, who both preceded him in death. After moving to Augusta in the ninth grade, he attended and graduated from Richmond Academy. He touched countless hearts and minds and will be missed by many. Cliff was a decades long celebrity in the Augusta area. At the young age of 15, he would perform with the Augusta Players, where he conveyed a natural stage presence and would develop an affinity for public speaking. From there, he became a local radio DJ at WBBQ and WRDW. As a WBBQ “good guy,” he made appearances at various local venues, including Augusta’s Teen Town, where many came just to see him perform. A star was born. His high energy and immense charisma were a sight to be seen. In fact, he chose the name “Cliff" as a stage/DJ name because David was already being used at the radio station. In addition, Cliff was responsible for bringing the Monkees, Allman Brothers, Neil Diamond and many others to Augusta. A proud member of the United States Army Reserve, Cliff served his country during the Vietnam War. During the same time period, his promotions and marketing career was growing, so he decided to enter the local night club industry. First, Cliff started a night club located on the Aiken-Augusta Highway. Then, he founded the incredibly popular Kitten’s Corner in south Augusta. Cliff was also formerly associated with The Whipping Post and Katmandu venues. He possessed an uncanny ability to gauge what was popular and how to attract a crowd. Despite his busy schedule, Cliff always took time to take care of family and friends. He had a generous spirit and will be fondly remembered for hosting the Annual Dixie Darlin' Christmas party, where all proceeds were donated to the local Empty Stocking Fund. Above all else, he was a proud Augusta resident that worked tirelessly through the years to make the community a better place. Survivors include his son: David Carlisle; sisters: Dianne Litchfield and Vickie Courtenay (Chuck); niece: Jenifer Meybohm (Grey) and nephew: Rick Hopper (Michelle). A memorial service will be held on Saturday, February 5, 2022 at 12:00 P.M. in front of the Mausoleum at Westover Memorial Park. In lieu of flowers, donations may be made to the Empty Stocking Fund at https://emptystockingfund.org/holiday-gifts/ or to the Door of Hope Ministry, P.O. Box 2294, Evans, GA 30907. Thomas Poteet & Son Funeral Directors, 214 Davis Rd., Augusta, GA 30907 (706) 364-8484. Please sign the guestbook at www.thomaspoteet.com

The family of Cliff Carlisle created this Life Tributes page to make it easy to share your memories.

Send flowers to the Carlisle family.