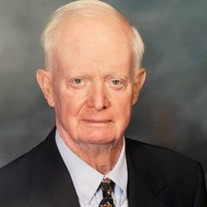 Colonel Michael (Mike) McCahan Downes (U.S. Army, Retired), 85, died on May 12, 2021, at his home in Augusta, Georgia. For so many who had the privilege of knowing him, Colonel Downes will be remembered as a leader, a mentor, and a friend. Mike was predeceased by his beautiful and talented wife of 57 years, Barbara Anne (Babs) Downes, and by his parents, John Lee Carroll Downes and Ruth McCahan Downes, and by his brother, John Lee Carroll (Hap) Downes. Mike was born in 1935 in Philadelphia, Pennsylvania. In 1953, he graduated from the Peddie School, a college preparatory and boy’s boarding school in Hightstown, New Jersey. At the University of Georgia, he graduated with a business degree in 1957 and a law degree in 1959. He was on the Varsity Track Team and served as Commander of the University’s Army Reserve Officer Training Command (ROTC) Regiment. He was a member of Phi Kappa Phi Honor Society, Phi Delta Phi Legal Fraternity, Pi Kappa Alpha Social Fraternity, Phi Eta Sigma Business Scholastic Society, and Who’s Who in American Universities and Colleges. In 1957, Mike was commissioned as a Second Lieutenant of Infantry. In 1960, after Law School and admission to the State Bar of Georgia, he began his military career at Fort Benning, Georgia. He went on to serve in the Regular Army for 30 years. As an Infantry Officer, he completed three of the Army’s rigorous and prestigious combat training programs: the U.S. Army Ranger School, the Airborne School for Army parachutists, and the Pathfinder School. In 1963, Mike transferred from Infantry to the Judge Advocate General Corps (JAGC). As an Army lawyer and a Military Judge, he served in various locations around the United States and overseas in Vietnam, Korea, and Germany. In January 1990, Mike retired as Military Judge at Fort Bragg. His numerous awards and decorations include the Legion of Merit, Bronze Star for Meritorious Service, Meritorious Service Medal, Army Commendation Medal, Ranger Tab, Master Parachutist Wings, and Pathfinder Badge. Upon retirement from the Army, Mike was hired by Westinghouse Savannah River Company, the management and operating contractor for Savannah River Site (SRS), a Department of Energy (DOE) nuclear facility in South Carolina. He originated the SRS Ethics Program for contractors which became a model throughout the DOE complex. Mike was an avid golfer and belonged to West Lake Country Club and Bartram Golf Club. In the mid-1980s he became a volunteer golf course rater for the Georgia State Golf Association and served as the East Zone Team Captain for over 25 years. After his retirement from Westinghouse, Mike dedicated himself to his wonderful wife, Babs. He attributed every success in the Army and thereafter to her love and support. He would frequently say that Army wives were special and that Babs was the most special of them all. They went to lunch almost every day and often ended up at Windsor Jewelry Store in Augusta, Georgia. Mike is survived by his son, Michael Downes, Jr., his wife Kimberly, and their children, Cade and Reagan; and his daughter Samantha Poehlman, her husband Lee, and their sons, Gavin and Logan. On Friday, May 28, 2021, from 4:00 to 7:00 P.M., the family will receive guests at Mike’s residence at 601 Muirfield Court, Augusta, Georgia. The following day, Saturday, May 29, 2021, at 2:00 P.M., a graveside ceremony will be held at Westover Cemetery in Augusta, Georgia. In lieu of flowers, memorial donations may be made to Quest Church in Grovetown, Georgia at thequestonline.com. Thomas Poteet & Son Funeral Directors, 214 Davis Rd., Augusta, GA 30907 (706) 364-8484. Please sign the guestbook at www.thomaspoteet.com

Colonel Michael (Mike) McCahan Downes (U.S. Army, Retired), 85, died on May 12, 2021, at his home in Augusta, Georgia. For so many who had the privilege of knowing him, Colonel Downes will be remembered as a leader, a mentor, and a friend. Mike... View Obituary & Service Information

The family of Colonel Michael (Mike) McCahan Downes created this Life Tributes page to make it easy to share your memories.

Send flowers to the Downes family.