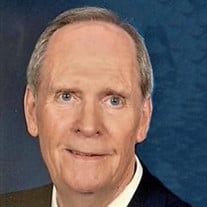 Augusta, GA – Entered into rest on Sunday, February 6, 2022, Mr. Charles Daniel Cook, 88, loving husband of 67 years to Louise Wardlaw Cook. Dan was a native of Augusta. He graduated from Richmond Academy and later graduated from University of Georgia School of Pharmacy in 1958 where was a member of Phi Delta Theta. In between his education he served in the Army. Dan worked as a pharmacist at Daniel Village pharmacy before he and Louise opened National Hills Pharmacy together. He retired from pharmacy to pursue other interests. He worked for West Lake Country Club Development Company and also West Lake Country Club organizing and planning Events. From 1967-1968 he served as president at the West Augusta Rotary Club. In 1982, Dan opened his own family business along with Dawn & Chuck. Dan Cook Associates Inc., a promotional advertisement agency where he was CEO until his retirement in 2014. He was awarded the Silver Medal of Honor by the Augusta Advertising Club. He was a longtime member of First Baptist Church, serving as a Deacon and was also a member of Cason Bruker Bible class. He was instrumental in starting the Wednesday Morning Men’s prayer breakfast at the church. Dan was a founding member of the Georgia Bulldog Club where he served as President for 2 years. He continued to be involved with the Club and was awarded the distinguished Dan Magill Award for over 40 years of Service to the organization. He served on several boards including the United Cerebral Palsy and March of Dimes. He was instrumental in the beginning of a local support group associated with the National Alliance on Mental Illness. Dan suffered from bipolar disorder and he used his experience to encourage others with support and education. He started the Bert Yancey Memorial Golf Tournament, a local fundraising event to raise awareness and support to those who have also suffered from bipolar disorder. This event has continued for over 30 years and is still active today. After 30 years in the Promotional Advertising business, Dan retired but that didn’t stop him from reaching out to others with business advice. He was always mentoring others to better their lives wherever he went. His mission was to give HOPE and he even created a Hope Pin which many of you may be the recipient of. Family members in addition to his wife include his daughter: Dawn Cook Jones (Tony); son: Charles “Chuck” Daniel Cook, Jr. (Karen); grandchildren: Cassie Elizabeth Jones, Anna Marie Jones, Anthony Gene Jones, Jr., Davis Jackson Cook, and Jake Turner Cook; and brother: James R. Cook, Jr. Dan was preceded in death by his father James R. Cook, Sr., his mother Louise Murrah, his stepfather Clarence Ramsbotham, and his sister Patricia Ann Sleister. The funeral service will be held Friday, February 11, 2022 at 11:00 A.M. in Storey Chapel at First Baptist Church with Dr. Rodger Murchison and Rev. Alan Bunn officiating. Interment will follow in Westover Memorial Park. Memorial contributions may be made to First Baptist Church, 3500 Walton Way Ext., Augusta, GA 30909 or to the National Alliance on Mental Illness Augusta, P.O. Box 3904, Augusta, GA 30914. The family will receive friends Thursday, February 10, 2022 from 5:00 until 7:00 P.M. at Thomas Poteet & Son Funeral Directors, 214 Davis Rd., Augusta, GA 30907 (706) 364-8484. Please sign the guestbook at www.thomaspoteet.com

The family of Dan Cook created this Life Tributes page to make it easy to share your memories.

Send flowers to the Cook family.