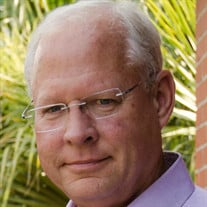 Augusta, GA - Daniel Joseph Scherer, beloved husband of Mayclare Logan Scherer, entered into eternal rest on August 5, 2021 surrounded by his wife and five children. In addition to his wife, Dan is survived by his daughter, Catherine Patterson (Rafe), sons, Joseph (Amy), Charles (Kristen), Richard (Michelle), and Bernard (Jenna), grandchildren Edward & John Michael Purser, John Joseph & William Scherer, Conor & Quinlan Welch, Davis & Lillian Scherer, Robert, Michael & Matthew Scherer, Miles & Blakely Scherer. He is also survived by his brother, John Scherer (Cindy), sisters Patricia Thompson (John), Anne Scherer, Marian Inman (Todd), Tina Rojas (Carlos), stepmother Hedy Scherer, and many nieces and nephews. He is predeceased by his parents John and Marian Scherer. Affectionately known as “Gumpy” or “Bump” to his grandchildren and “Uncle Dan” to his nieces and nephews, he enjoyed spending weekends at Plum Branch Yacht Club, summer trips to the beach with family, and traveling in general. He was known for his “dad” jokes, his wit and devilish charm. He loved to cook and shared his talent with all. He liked to say that gathering for a meal with family and friends was a “celebration”. He loved other people’s company, laughing and making lifetime memories. To his children’s friends, he was a fun father figure and loved by many of them. He volunteered his time to cook for the Westside High School baseball team fundraisers and the football team’s concessions and breakfasts the morning after games. Dan was a native Augustan, a member of St. Mary on the Hill Catholic Church, and he worked for Beverage South for 38 years. He was a member of the Irish American Heritage Society. He attended Mount St. Joseph and St. Mary Catholic Schools, was a 1970 graduate of Aquinas High School and attended Belmont Abbey College. Dan touched countless people’s lives, and he will be missed by many. The family will receive family and friends on Sunday, August 8, 2021 from 5 pm until 7 pm at Thomas Poteet & Son. A funeral service will be held on Monday, August 9, 2021 at 11 am at St. Mary on the Hill Catholic Church, 1420 Monte Sano Ave, Augusta, Ga, 30904. Interment will follow directly after at Westover Memorial Park. In lieu of flowers, the family asks that donations be made to the Idiopathic Pulmonary Fibrosis Foundation (ipffoundation.org). Thomas Poteet & Son Funeral Directors, 214 Davis Rd., Augusta, GA 30907 (706) 364-8484. Please sign the guestbook at www.thomaspoteet.com

The family of Daniel "Dan" J. Scherer created this Life Tributes page to make it easy to share your memories.

Send flowers to the Scherer family.