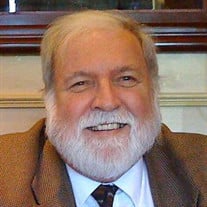 Augusta, GA - David Victor Weber, 71, entered into rest February 11, 2022, at AU Medical Center. David was born in Seattle, Washington, February 2, 1951, to James and Walda Weber. He graduated from Auburn University in 1972 and graduated from the Walter F. George School of Law at Mercer University in 1976. He practiced law in Augusta for more than 43 years including 10 years with the public defender’s office. He enjoyed membership in the Augusta Optimist Club in which he served as Lieutenant Governor. He is survived by his wife of 48 years, Mary Frances, and four daughters: Catherine Lynn Cullen (Rory), Lauren Patricia Jennings (Jamey), Janet Rebecca Weber (Weston Aenchbacher), and Elizabeth Weber Baker. Additional survivors include six grand-children: Kai Walvoord, Remy Walvoord, Elise Walvoord, Colby Jennings, Michael Jennings, and Quentin Baker. He is also survived by a sister, Janet Weber, and two brothers, Tom Weber and Bob Weber. David’s family wishes to express gratitude to the doctors, the nurses, and the staff of the Shock Trauma ICU at AU Medical Center for the exceptional care and concern he received there. A memorial service will be held on Friday, February 25, 2022 at 3:00 p.m. in the chapel of Thomas Poteet & Son Funeral Directors with Fr. Mark Ross officiating. The family will receive friends prior to the service from 2:00 until 3:00 p.m.

The family of David Weber created this Life Tributes page to make it easy to share your memories.

Send flowers to the Weber family.