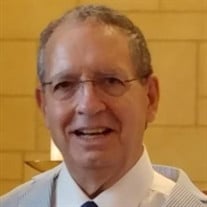 Dennis E. Gabriel Augusta, GA – With heavy hearts we announce the passing of Dennis Edward Gabriel on June 25, 2021 after a brave battle with pancreatic cancer. He is survived by his wife Lynne Fairburn Gabriel, his brother Julius Gabriel, and his sister Mavis McLeod. His children are Katherine Morris, and Kimberly Stephens. His stepchildren are Forest Madison Barrett III, George Douglas Barrett, John Edwin Barrett, and Elisabeth Fairburn Barrett. Dennis has five grandchildren: Macay and Macenzie Stephen, Marlowe and Wiley Morris, and Lacey Yates. Dennis was predeceased by his parents Lola Mae Reese, and Julius Earl Gabriel. Dennis graduated from Columbia High School. He attended University of South Carolina earning a Bachelor of Arts degree in History and Economics and a master’s degree in public administration. His interest in theology led him to earn a theology degree from the Southern Baptist Theological Seminary. Dennis was drafted in the Army during the Vietnam era and served as an x-ray technician for the burn unit. After leaving the Army, Dennis began his career in public administration. He worked as County Commissioner for Monks Corner. He was also a member of the County Manager Association for training and development system. While in the Army, Dennis served as a military chaplain and later as an interim pastor in rural South Carolina. However, Dennis's true calling was to the Catholic Church where he and his wife, Lynne, were confirmed in 2017. Dennis earned his Fourth Degree in the Knights of Columbus and currently served as the lecturer. He organized the Catholic Night at the Ball Park, served as an usher, and attended the Right to Life Rally in Washington D.C. As a young man, Dennis enjoyed traveling, fly fishing, and camping. His latest hobbies were walking his Labrador retriever and bird watching. Dennis will be miss by all who knew him - his fine feathered friends, his dog, his wife, brother, sister, his children, his pastor, and parish friends! If desired, memorial gifts may be made to St. Teresa of Avila Catholic Church and School, Grovetown, Ga. A funeral mass will be held Thursday, July 1, 2021 at 11:00 A.M. at St. Teresa of Avila Catholic Church with Fr. Mike Ingram as celebrant. Interment will follow in Westover Memorial Park. The family will receive friends Thursday morning one hour prior to the service at the church. Thomas Poteet & Son Funeral Directors, 214 Davis Rd., Augusta, GA 30907 (706) 364-8484. Please sign the guestbook at www.thomaspoteet.com

Dennis E. Gabriel Augusta, GA &#8211; With heavy hearts we announce the passing of Dennis Edward Gabriel on June 25, 2021 after a brave battle with pancreatic cancer. He is survived by his wife Lynne Fairburn Gabriel, his brother Julius Gabriel,... View Obituary & Service Information

The family of Dennis Gabriel created this Life Tributes page to make it easy to share your memories.

Send flowers to the Gabriel family.