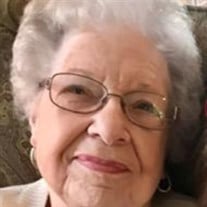 After a long, happy, well lived life Mrs. Dicye Lucas (Bootsie) Averette, age 87, of Hephzibah, GA awakened to eternal life on October 2, 2021. Bootsie was born in Washington, GA, on March 25, 1934. She was preceded in death by her husband J. Wallace Averette Jr., her parents, Cicero and Dicye Lucas, and her sister Linda Hopkins. She is survived by her son Joe (Erin) Averette; daughter Jan (Mike) O’Meara; daughter Dete (Mike) Crawford; grandchildren, Joseph (Heidi) Averette, Marie (Ron) Marchant, Erin (Chris) Pettis, Lucas (Melanie) O’Meara, Jonathan (Ansley) Crawford, Stephen Crawford; great-grandchildren, Mac and Aline Marchant, Grey and Alice O’Meara, Addelyn Averette, Avery Crawford, Bodie and Liam Pettis; her brother Cicero (Barbara) Lucas; and sisters Jean Cowart and Mildred Hackney. Mrs. Averette retired from Jefferson Electric Membership Corporation in 1996 after 32 years of dedicated service. She was a member of the United Methodist Women and the Washington, GA, chapter of the Daughters of the American Revolution. She was a devoted wife and mother, always putting the needs of her family above her own. Her children, Joe, Jan and Dete consider themselves blessed to have had such a special mom. Bootsie’s great joy was her family, both immediate and extended. She loved nothing more than to visit with family, share a meal, and share stories. She had an encyclopedic knowledge of family history and constantly amazed us with her knowledge of family long gone and the genealogy of seemingly everyone in her hometown of Washington. A private memorial service for Bootsie and her beloved husband Wallace will be held at Hephzibah United Methodist Church where they have been faithful members since 1964. The family would like to extend their appreciation to Harriet Taylor, Diane Johnson, Valerie Johnson, Savannah River ProHome Care, and Thrive at Augusta. In lieu of flowers, donations may be made to the Hephzibah United Methodist Church, P.O. Box 65, Hephzibah, GA, 30815, or to a charity of your choice.

After a long, happy, well lived life Mrs. Dicye Lucas (Bootsie) Averette, age 87, of Hephzibah, GA awakened to eternal life on October 2, 2021. Bootsie was born in Washington, GA, on March 25, 1934. She was preceded in death by... View Obituary & Service Information

The family of Dicye "Bootsie" Averette created this Life Tributes page to make it easy to share your memories.

Send flowers to the Averette family.