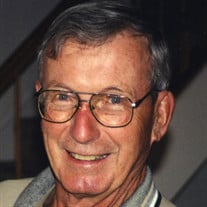 Edward Balog Austell, GA – Edward A Balog passed away in the early morning of Wednesday, February 24, 2021, from complications of a rapidly progressing dementia. He was surrounded by his children. Ed was born in the factory town of Roebling, NJ, on the eve of the great depression and graduated from high school as WWII came to a close. From high school, Ed entered the US Navy. A superior officer suggested he go to college to further his military career. He graduated from Seton Hall University in NJ and was commissioned through Army ROTC. Ed’s military police reserve unit was activated during the Korean War. Upon returning to civilian life, he fell in love with Isabel Phillips of Florence, NJ; they married in 1957 and started their family. Ed did two tours in Vietnam when his unit was re-activated. His last duty station was Fort Gordon. After leaving the service, he worked at the SC Dept. of Corrections in Columbia. He retired in 1989, and he and Isabel returned to Augusta and began to travel. He lost his traveling companion and great love in 1995. He became an avid golfer with several military and retiree groups and often spoke of his golf buddies to his children. Ed is survived by his children Bridget Balog of Alexandria, Virginia; Edward Balog (Linda Eisenschenk) of Marietta, Georgia; and Timothy (Christine) Balog of Chantilly, Virginia; his four granddaughters Elizabeth, Kaitlin, Megan, and Nicole; and his sisters Helen Ryan and Mary Farmer. He is preceded in death by Isabel; his infant daughter, Elizabeth; and his brother, Michael. The funeral will be at St. Mary on the Hill on March 6 at 2:00 with Fr. Vernon Knight as celebrant. In lieu of flowers, memorial contributions may be made to your local hospice or the Alzheimer’s Association. Thomas Poteet & Son Funeral Directors, 214 Davis Rd., Augusta, GA 30907 (706) 364-8484. Please sign the guestbook at www.thomaspoteet.com

Edward Balog Austell, GA &#8211; Edward A Balog passed away in the early morning of Wednesday, February 24, 2021, from complications of a rapidly progressing dementia. He was surrounded by his children. Ed was born in the factory town of... View Obituary & Service Information

The family of Edward Balog created this Life Tributes page to make it easy to share your memories.

Austell, GA – Edward A Balog passed away in the...

Send flowers to the Balog family.