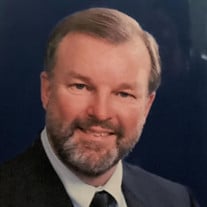 Elwyn Gary Beddingfield died on October 27, 2021, at his farm in Dearing, Georgia. Elwyn was born in Augusta on March 27, 1946, to William Penn Beddingfield, Jr. and Ethel Chester Beddingfield, natives of Wrightsville, Georgia. In 1964, Elwyn graduated from Richmond Academy in Augusta and went on to receive his BBA from Augusta College. He later received his Doctor of Jurisprudence (JD) from Augusta Law School in 1977, while owning and operating Master City Motors. He practiced law in his hometown of Augusta for forty years. He married the love of his life, Beverly Bailey Beddingfield, on June 28, 1969. They were married for fifty-two years. They had three children: Elwyn Gary Beddingfield, Jr., Janis Beddingfield Embry, and Eric Lee Beddingfield and eight grandchildren. Elwyn loved spending time at his farm. He enjoyed working with his cows, fishing in the ponds, hunting, and tending to the land. He loved boating and spending time on the water. Elwyn attended sea school in Charleston, South Carolina and received his Masters Captains license. He was a member and past Commodore of The Augusta Yacht Club. He was a licensed pilot and licensed diver. He sincerely valued education and learning. While in high school, Elwyn was a founding member of a band named The Deacons. His passion for music continued throughout his life. He enjoyed playing guitar, singing, and playing piano. He was an ordained minister and officiated the weddings of numerous friends. Elwyn and Beverly loved to travel and were fortunate to have visited forty-nine states and many extraordinary countries across five continents. He loved learning about different cultures and how they lived, rather than just seeing touristy spots. Elwyn died doing what he loved, while working on his farm. He lived life to the fullest and felt that he was extremely blessed by God, and he always had a thankful and loving heart. He never met a stranger and was a friend to all. According to Elwyn, his family was his greatest accomplishment and joy. He will be greatly missed by his beloved wife, family, and friends. Elwyn is survived by his wife, Beverly Bailey Beddingfield; their son, Elwyn Gary Beddingfield, Jr., his wife, Cristy Hendrix Beddingfield, their two daughters, Mason Elizabeth Beddingfield and Avery Lauren Beddingfield; daughter, Janis Beddingfield Embry, her four children, Emily Florence Embry, Terrell Jackson Embry, Jr., Katherine Annette Embry, and Garric Charles Embry; son, Eric Lee Beddingfield, his wife, Jessica Greenway Beddingfield, their two sons, Eric Lee Beddingfield, Jr. and Elwyn Wayne Beddingfield; as well as his sister, Joycelyn Beddingfield Kelley of Griffin, Georgia, his sister-in-law, Ellen Bailey Leonforte of Augusta, Georgia, and cherished nieces and nephews. Elwyn is preceded in death by his parents, William Penn Beddingfield, Jr. and Ethel Chester Beddingfield, and his brother, William Penn Beddingfield, III. Elwyn’s funeral will be a celebration of his life and shall be officiated by his close friend, Chuck Courtenay, Jr. The family asks that any donations be made to Door of Hope Ministry in his memory. Door of Hope Ministry PO Box 2294 Evans, GA 30809 Thomas Poteet & Son Funeral Directors, 214 Davis Rd., Augusta, GA 30907 (706) 364-8484. Please sign the guestbook at www.thomaspoteet.com

The family of Elwyn Gary Beddingfield created this Life Tributes page to make it easy to share your memories.

Send flowers to the Beddingfield family.