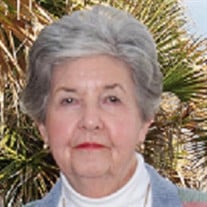 Evans, GA - Frances Peck Dickens passed away quietly at her home in Evans, GA on Tuesday, September 28, 2021. The celebration of her life will be conducted Saturday, October 2, 2021, 12 noon, graveside at the Dickens-Guill-Hill Square in the Sparta Cemetery by the Rev. Dr. Ed Nelson. She is survived by her children; Gordon Lee Dickens, III (Elizabeth), Marian Dickens Ramey (John), Marvin Peck Dickens (Patricia), by eight grandchildren; Raymond Lee Dickens (Stephanie), Gordon Westlake Dickens, Christopher Bryan Ramey (Aimee), Gretchen Ramey Pickens (Bryan), Katherine Miree Dickens, Sarah Alexandria Dickens, Rachel Elizabeth Dickens, and Jonathan V. Dickens, and by two great-grandchildren; Alice Lee Dickens and Zelda Rae Dickens. She was born August 28, 1927 at Ft McPherson, GA, the first of two children born to Marion Miree Peck and Marvin Westlake Peck, Sr. Her parents and her only sibling, Marvin Westlake Peck, Jr., preceded her in death. She was an Army brat and lived in many places growing up to include Ft McPherson, GA, West Point, NY, Schofield Barracks, HI, Ft Sam Houston, TX, Fort Muskogee, OK, The Presidio, CA, and Panama. Her family settled in Sparta, GA when she was 15. She graduated from Brenau College with a major in English and attended Finishing School in Nashville and New York City. In 1951 she married the love of her life, Gordon Lee Dickens, Jr and they made their home in Sparta, GA and then in Milledgeville, GA before moving to Evans, GA in 2016. Bridge was her favorite activity, and she was a member of several bridge clubs. She was a gifted artist in mediums that include watercolor, oil, acrylics, and china overglaze paint. Gardening was another love, and she was an ardent flower arranger. A library was her favorite place and books were her close friends. Her other loves were entertaining, travel, and needlework. She was active in the Daughters of the American Revolution and the Altar Guild at Milledgeville First United Methodist Church. The family is requesting that in lieu of flowers donations be made to Pierce Memorial United Methodist Church, Sparta, GA, Milledgeville First United Methodist Church, Milledgeville, GA or Mary Vinson Memorial Library, Milledgeville, GA. Funeral arrangements are being managed by Thomas Poteet & Sons Funeral Directors, 214 Davis Rd., Augusta, GA 30908 (706)364-8484. Please sign the guestbook at www.thomaspoteet.com.

Evans, GA - Frances Peck Dickens passed away quietly at her home in Evans, GA on Tuesday, September 28, 2021. The celebration of her life will be conducted Saturday, October 2, 2021, 12 noon, graveside at the Dickens-Guill-Hill Square in the... View Obituary & Service Information

The family of Frances Peck Dickens created this Life Tributes page to make it easy to share your memories.

Send flowers to the Dickens family.