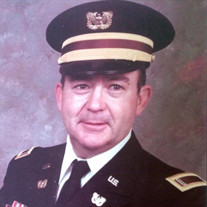 Evans, Georgia – Frank August Nagles, Jr. was born on 15 September 1933 in Rockford, Illinois; the son of Frank, Sr., and Dorothy Nagles, both deceased. After graduation from West Rockford High School in 1951, Frank served as an apprentice with J.I. Case Company, specializing in wood and metal pattern designs. On 14 March 1954, he married Dora Lea Best, also from Rockford, and together they shared a meaningful and adventurous life for sixty-six years. Frank loved baseball. As a young man, he was the catcher for the Beth Eden EUB church and shared his passion with his best friend and pitcher, Warren Tudor. Frank was also active in the local Rockford Industrial Baseball League. Frank joined the U.S. Army in 1955 and began a life-long journey that would offer him dignity and respect. He was extremely proud to be a soldier, and considered it not only a sworn duty, but an opportunity to serve his country throughout the world. During his twenty-seven-year career, Frank and Dora were stationed stateside in Missouri, Texas, Alabama, North Carolina, and locally, at Fort Gordon. He was also stationed in more exotic locations – Yokota Air Force Base, Japan; Nuremburg and Frankfort, Germany; and South Korea. He also served in the Vietnam War. Frank retired while stationed at Ft. Bragg, NC. Chief Warrant Officer Frank Nagles received many commendation medals and decorations during his career, including the Bronze Star, Legion of Merit, Vietnam Campaign Medal, and the Air Force Expeditionary Medal. Eight additional medals also enhanced his dress uniform: Vietnam Service Medal, National Defense Service Medal, Army Commendation Medal (two Oak Clusters), Good Conduct Medal (second award), Meritorious Unit Commendation, Armed Forces Reserve Medal, Expert Qualifying Badge for M-16 weaponry, and the Korean Defense Service Medal. After retirement, Frank and Dora returned to the Augusta area where they built a comfortable home in Evans, Georgia, and Frank discovered a new passion -- working in his yard. As a civilian, Frank worked for Johnson Controls at Ft. Gordon and the Augusta VA Medical Center. Frank enjoyed playing golf and looked forward to early April as he worked as a gallery guard at the Master’s golf tournament. Frank and Dora cultivated lasting friendships in Augusta, and many of these were due to bowling. They experienced bowling not only as a game of skill, but also as an opportunity to forge relationships that continued well beyond the sport itself. They became attached to life-long friends R.T. and Brownie Sumner and Claudus and Sara Ann Birdsong. Adventure was always something to appreciate as they all traveled together for many years. They voyaged or flew to unforgettable locations around the world including Alaska, Australia, and England. Life was fun! Frank also maintained his memberships in the Military Officers Association of America, Veterans of Foreign Wars (VFW), and was a loyal supporter of the American Legion, Post 192. He volunteered many hours in support of the Augusta Urban Ministries. Frank Nagles leaves behind a devoted legacy of two daughters, five grandchildren, and five great-grandchildren. Sherry Nagles Newman, and her husband, Michael, have three sons and two daughters-in-law: Christopher and Angela Newman of Augusta, GA, Stephen and Sarah Newman of Evans, GA, and Jamie Nicholas Newman of Atlanta, GA. Ann Marie Nagles Urban has a son and daughter, Jennifer Ann and Matthew of Littleton, Colorado. Frank and Dora’s great grandsons are Noah, David, Jaden, Gabriel, and Kellan Newman. Frank’s sister, Frances McCarthy lives in St. Cloud, Florida. Frank has thirteen nieces and nephews. Visitation for Frank Nagles will be Thursday, 18 February, 2021 at 1:00 PM at Aldersgate United Methodist Church – 3185 Wheeler Road, Augusta 30909, and the funeral service will follow at 2:00 PM at the church. The Reverends Jim Higgins and Stephen Newman will preside. Due to Covid restrictions, the graveside service in Milledgeville, Georgia will be held for immediate family only. In lieu of flowers, please donate to one, or both, of the following: Aldersgate Church or Augusta Urban Ministries – P.O. Box 14634, Augusta, GA 30909. Many thanks to our pallbearers: Michael Newman, Christopher Newman, Nicholas Newman, Noah Newman, Matthew Urban, Charles Jackson, and David Newman (Honorary Pallbearer). Thomas Poteet & Son Funeral Directors, 214 Davis Rd., Augusta, GA 30907 (706) 364-8484. Please sign the guestbook at www.thomaspoteet.com

Evans, Georgia &#8211; Frank August Nagles, Jr. was born on 15 September 1933 in Rockford, Illinois; the son of Frank, Sr., and Dorothy Nagles, both deceased. After graduation from West Rockford High School in 1951, Frank served as an apprentice... View Obituary & Service Information

The family of Frank August Nagles, Jr. created this Life Tributes page to make it easy to share your memories.