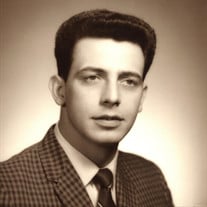 Augusta, GA - Promoted to glory on Sunday, January 16th, 2022. Mr. Frederick Lester Faour, 78, loving husband of 50 years to Margie Faour. Fred was a jack of all trades and a master of everything. He retired from Kendall&#8217;s/Tyco as the... View Obituary & Service Information

The family of Fred Faour created this Life Tributes page to make it easy to share your memories.

Send flowers to the Faour family.