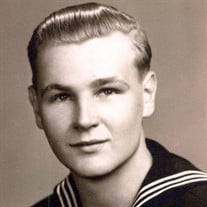 Augusta, GA- George Frederick Brodbeck, age 95, passed away on September 8, 2021. George was born April 28, 1926 in Philadelphia, Pennsylvania. George was raised in Exeter and Pittston, Pa. He graduated from Castle Heights Military school in Lebanon, Tennessee in 1944 where he played clarinet in the school band and was Sports Editor for the school paper. He was drafted into the US Navy in 1944 after high school during WWII. He completed basic training in Norfolk, Va. He went on to be a member of the first crew of the USS Everett Larson as a radarman. He also served aboard the USS McKean in the Pacific Theater. George was honorably discharged from the Navy in 1946. He was proud to serve in the US Navy and was frequently seen proudly wearing his WWII Veterans baseball cap around Augusta. After the war, George returned to Exeter, Pa and like many of his generation, attended college on the GI Bill, graduating from Bucknell University with a degree in Accounting and Finance. George married his sweet bride, Helen, in August 1950 and they shared 70 years of marriage together. George’s career spanned from owning an ESSO gas station in Forty-Fort, Pa to accounting roles with the Duplin Company in Forty-Fort, Pa, Thermoid Rubber in Trenton, NJ and Babcock & Wilcox in Akron, Ohio and finally moving to Augusta, Ga as Financial Controller with Babcock & Wilcox in 1971. George retired from B&W/Thermal Ceramics in 1998 after more than 35 years with the company. After a brief retirement, George returned as a consultant in accounting where he continued to work with his friends and colleagues well into his 90s. George was a member of the Uptown Kiwanis Club for many years serving as Treasurer, President and District Lieutenant Governor. George enjoyed the weekly club lunches with his fellow members and was an avid supporter of the annual Vidalia Onion Sales Fundraiser. George is preceded in death by his wife of 70 years, Helen Teresa Healey Brobeck, his parents, George H.L. Brodbeck and Anna Hayn Brodbeck and his sister, Marion Brodbeck Stahl. George leaves behind four children, George H Brodbeck (Janet) of Bethlehem, Pa., Howard D Brodbeck (Cheryl) of Goodyear, Az, Diane C Lowe (George) of Goodyear, Az, and Donna B Byrdy (Stan) of Augusta, grandchildren Ross Brodbeck (Christie), Sarah Byers (Jeff), G. Matt Lowe (Blaise), John Lowe (Tricia), Laura Hoy (Rhys), Erin Jaen (Eric), Colleen Brodbeck, W. Andrew Lowe (Ashley), David Byrdy, Hannah Byrdy and 13 great-grandchildren. A memorial service to celebrate the lives of George and Helen will be conducted together on Saturday, September 25, 2021 at 11 am at the Lutheran Church of the Resurrection 725 Greene Street Augusta, Ga. The family would like to extend a sincere thank-you to the staff and caregivers of The Claiborne at WestLake who provided special care to George. In lieu of flowers, donations can be made to the Lutheran Church of the Resurrection or your favorite charity.

The family of George Brodbeck created this Life Tributes page to make it easy to share your memories.

Send flowers to the Brodbeck family.