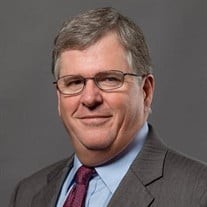 Augusta, GA – George R. Hall, 59, loving husband of Margaret, passed away suddenly on Sunday, September 26, 2021. George is a native of Red Springs, NC, but has made his home in Augusta with his family for the past 36 years. George was born the middle of three sons to Helen and Dr. Robert G. Hall, Presbyterian Minister and later a Professor of Homiletics at Erskine College. George graduated summa cum laude from Presbyterian College in 1983 where he was a member of Theta Chi Fraternity and the Track & Field Team. Additionally, he served as Interfraternity Council President. In 1986, he earned his Juris Doctor from the University of South Carolina. George and Margaret moved to Augusta in August 1986 where he joined the Hull Barrett law firm. Of his 35 years practicing, he spent 30 years as a partner where he successfully tried over 120 cases and mediated many more. He was chosen multiple times by his fellow partners to serve on the firm’s management board. George was elected a Fellow to the prestigious American College of Trial Lawyers and was recognized by his peers in several notable publications. He was past President of the Augusta Bar Association and was recently sworn in as President of the Georgia Defense Lawyers Association. George treated everyone with honesty, respect, humility, and professionalism. Due to his demeanor and wisdom, his counsel was sought by lawyers within his firm and across the profession. George put into practice what he had learned as an Eagle Scout: to keep himself physically strong, mentally awake, and morally straight. George was an incredible example of service not only in his career, but also in his community. He was an active member of Reid Memorial Presbyterian Church where he served as a Deacon, a Stephen Minister, and an Elder - including tenures as Clerk of Session and Moderator of various committees. He also served several years on the board of the Augusta Sports Counsel, was recognized as a Paul C. Harris Fellow of Rotary International, and as a board member of the Augusta Rotary Hull Fund. George embodied the words of theologian and humanitarian Albert Schweitzer who said, “The purpose of human life is to serve, and to show compassion and the will to help others.” George was an avid outdoorsman who enjoyed hunting, fishing, running, and swimming. He was intelligent, witty, a true friend, and a joy to be around. Above all else, George loved life and he loved his family. He is survived by his beloved family including his wife: Margaret Carr Hall, his sons: Thomas Wade Hall and David Watkins Hall (Lauren); granddaughter: Aubrey Hall; brothers: Robert G. Hall, PhD (Carolyn Malone, PhD) and Phillip D. Hall, PharmD (Rayna Hall, MD); and many other loving family members. He is preceded in death by his parents, Dr. Robert G. and Helen Hall. A memorial service will be held Saturday, October 2, 2021 at 1:00 P.M. at Reid Memorial Presbyterian Church with Rev. Nadine Ellsworth-Moran and Rev. Robert F. Hunt officiating. The family will visit with friends following the service. In lieu of flowers, memorials may be made to the Dr. Robert G. Hall Scholarship Fund at Presbyterian College, 503 S. Broad Street, Clinton, SC 29325 or Reid Memorial Presbyterian Church, 2261 Walton Way, Augusta, GA 30904. Thomas Poteet & Son Funeral Directors, 214 Davis Rd., Augusta, GA 30907 (706) 364-8484. Please sign the guestbook at www.thomaspoteet.com

Augusta, GA &#8211; George R. Hall, 59, loving husband of Margaret, passed away suddenly on Sunday, September 26, 2021. George is a native of Red Springs, NC, but has made his home in Augusta with his family for the past 36 years. George was... View Obituary & Service Information

The family of George R. Hall created this Life Tributes page to make it easy to share your memories.

Send flowers to the Hall family.