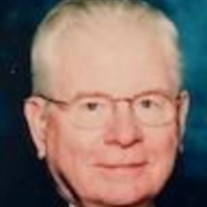 George Cecil Lenz, Jr. Augusta, GA - George Cecil Lenz Jr., 93, of Augusta, Georgia entered into eternal rest on Sunday, February 14, 2021. George was born October 20, 1927 to George C. Lenz and Grace Lawton Lenz of Aiken SC. George graduated in 1946 from St. Angela Catholic High School Aiken SC, He continued his education at the Citadel where earned a degree in business administration, played saxophone in the Bulldog orchestra, appointed president of the Newman Club for Catholic Cadets, business manager of The Shako, literary magazine of the Citadel. He returned to Aiken in 1950 where he helped with the family pharmacy and deli. He spent 18 years in the SC Army National Guard and worked 43 years at Merry Brick retiring in 1993 as Manager of Transportation and Logistics. George was an active member of Saint Mary on the Hill Catholic Church. He had a great devotion to his faith and often lent a helping hand to people and various relief organizations like Habitat for Humanity, hurricane relief trips. He enjoyed tinkering around the house especially the Folly Beach house. He will be remembered for his deep abiding faith, sense of humor and unwavering dedication to his family especially to his wife Peggy. He is preceded in death by his brother Lawton Lenz and sister Louise Lenz Landry, and son-in-law Greg Dross. Left to cherish his memories are his wife Peggy, his children, Mike Lenz (Mary), Carol Ferguson (Bill) and Laura Dross, brother-in-law Victor Brodeur (Diane), grandson Jeremy Kirschner (Jenelle) and numerous nieces and nephews. The family wishes to extend a special thank you to doctors and nurses at The Georgia Cancer Center who gave so generously of their love, kindness, and encouragement over the last years of his life and to the nurses and staff of University Extended Care Westwood. A private graveside will be held at Westover Memorial Park. In lieu of flowers, donations may be made to St. Mary on the Hill Catholic Church, 1420 Monte Sano Avenue, Augusta, GA 30904 or Augusta Habitat for Humanity, 1002 Walton Way, Augusta, GA 30901. Thomas Poteet & Son Funeral Directors, 214 Davis Rd., Augusta, GA 30907 (706) 364-8484. Please sign the guestbook at www.thomaspoteet.com

The family of George C. Lenz Jr. created this Life Tributes page to make it easy to share your memories.

Send flowers to the Lenz family.