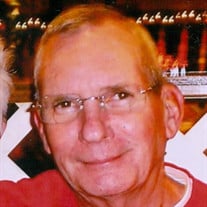 Evans, GA – Col. Harry C. “Pops” Pund, III, passed away Sunday, May 29, 2022 at the age of 80, in his hometown of Augusta, GA. His battle with Parkinson’s Disease in recent years showed his courage in facing life challenges with his usual steadfast will and determination. Despite the pain, Harry never complained and stayed strong to the end. He was on the way to see his first grandchild get married when God decided to give him the best seat in the house. Thankfully the end came quick and painless. Harry was born to Barbara and Harry Pund, Jr. and returned to Augusta at the age of 10 and was cared for and raised by his grandparents Hattie and Harry Pund, Sr. He took great pride in graduating from The Citadel in 1963, thereafter he became a decorated, career, combat officer in the U.S. Air Force. He loved his God, family and country. His service to his brothers in combat by flying B-52 bombing raids and C-7 Caribou touch and go resupply missions, no doubt saved many lives. Harry married his best friend Dianne on October 30, 1965. They met by chance on a blind date and married just three months later. Together they had three children. They were partners in duty and family. Harry retired as an Air Force Colonel after 26 years of service. Harry was born on Veteran’s Day, served his country, loved his family and took his leave on Memorial Day weekend. He will be lovingly missed. Family members in addition to his wife, Dianne include his children: Karen Barker (Jim Bob), Todd Pund (Carey) and Ashley Pund (Jennifer); grandchildren: Chance Barker (Tina), Logan Barker, Jack Barker, Carissa Pund, Catherine Pund, Parker Pund, and Gracen Pund; brothers: John Pund, David Pund and Jaime Pund and sisters: Laura Morgan Haigh and Margaret Anderson. A graveside service will be held Saturday, June 18, 2022 at 11:00 A.M. at Westover Memorial Park with Rev. David Hunter officiating. Memorial contributions may be made to Parkinson's Foundation, 200 SE 1st Street, Suite 800, Miami, FL 33131. The family will receive friends Friday, June 17, 2022, from 5:00 until 7:00 P.M. at Thomas Poteet & Son Funeral Directors, 214 Davis Rd., Augusta, GA 30907 (706) 364-8484. Please sign the guestbook at www.thomaspoteet.com

The family of Col. Harry C. Pund, III created this Life Tributes page to make it easy to share your memories.

Send flowers to the Pund, family.