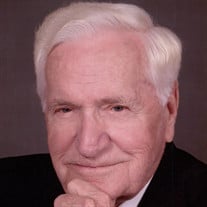 Hiram C. “Pete” Cartee Augusta, GA – On June 22, 2021, Hiram C. “Pete” Cartee fell into the arms of our Lord, after almost five months with kidney failure, sepsis, and pneumonia. Pete was a native of Metter, Georgia but spent his years growing up in Lakeland and Orlando, Florida. He joined the Navy at age 17 to eagerly serve his county in WWII. While his ship was docked in Boston Harbor, he and a couple of his buddies, while looking for some entertainment in the city, decided to go roller skating. It was in that skating rink that he met Gwen Peach, who was to become his wife for the next fifty-five years. After the war, he decided to leave the Navy and join the Army so he could spend time with his new wife and begin his family. He was one of the oldest military survivors of WWII and as late as 2018, still participated in veterans’ affairs, visiting the war monuments in Washington, DC. He is survived by his son and daughter: Jim Cartee and Carol Hall (Albert), both born in Orlando, Florida; granddaughters: Melissa Castle (Dale) and Bridget Houck (Gary); great grandchildren: Caleb Burke (Jayden) and Halei Burke; great great granddaughter: Lainey Burke, born last year. Jim and Carol would like to acknowledge and say thank you to Ms. Martha Jean Culpepper, who offered Pete love and care since the passing of our mother in 1998. Mr. Cartee’s career included retiring from the US Army, owning and operating several service stations for Standard Oil Company, British Petroleum (BP); serving as a law enforcement officer for Waynesboro, Metter, Wrens and Harlem, Georgia; managing a package shop for his son and perfecting his love of golf. He was baptized into the Baptist faith in 1998 at First Baptist Church of Augusta by Dr. Timothy Owings, where he remained an active member until his death. Services will be held at Storey Chapel of First Baptist Church, Saturday, June 26, 2021, at 2:00 P.M. with family visitation being an hour preceding the service. Loving and devoted family friend, Dr. Greg DeLoach, will be officiating. Entombment will be private at Westover Mausoleum. In lieu of flowers or food, contributions may be made to the First Baptist Church of Augusta and That’s What Friends Are For, animal rescue. Thomas Poteet & Son Funeral Directors, 214 Davis Rd., Augusta, GA 30907 (706) 364-8484. Please sign the guestbook at www.thomaspoteet.com

The family of Hiram C. "Pete" Cartee created this Life Tributes page to make it easy to share your memories.

Send flowers to the Cartee family.