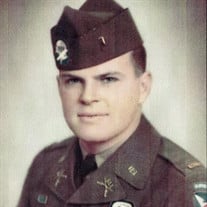 Augusta, GA – LTC Howard E. Schneider, USA (Ret.) passed away peacefully at Brandon Wilde’s Assisted Living Community on April 14th, 2019 surrounded by family. He was born in Lincoln, NE, to Alex and Mary Hardt Schneider descendants, of Volga Germans on October 24th, 1927. He was an only child, and he spent his formative years in Lincoln. On Dec. 24th, 1946 he enlisted into the United States Army and reported to Camp McCoy, Wisconsin. He served 18 months and upon his discharge, with the G.I. Bill in hand, he enrolled at his beloved University of Nebraska (Go Big Red) as a Business Major while enrolling in ROTC. In May, 1950, Howard graduated and was commissioned a 2nd Lieutenant in the Regular Army. He was soon sent to Korea during the Korean Conflict where he served with the 32nd Infantry Regiment (aka The Queens Own) until being wounded in action on April 26th and again on August 27th, 1951. For wounds received he was awarded the Purple Heart with 1st Oak Leaf Cluster and the Bronze Star with “V” with 1st Oak Leaf Cluster. He then spent the next year convalescing at Camp Carson, CO, where he met his future wife, Dorothy Hackett who was a nurse assigned to his care. In July, 1952 they wed, and over the ensuing years three children were born: Matthew (Ft. Campbell, KY), Paula (Ft. Benning, GA), and Katharina (Landstuhl, West Germany). He served in Japan, Korea (two tours), Vietnam, and Germany (multiple tours). During his tour in Vietnam during the period 1970 /1971, LTC Schneider served as an American Advisor to the ARVN 21st Division based out of Bac Lieu, South Vietnam. He was fluent in both German and Russian. As a result of his language proficiency, he served two tours with the United States Military Liaison Mission (USMLM) in West Berlin / Potsdam, East Germany. USMLM was little known to the outside world but played a significant role in gathering intelligence of Soviet troop movements and readiness during the height of the Cold War. During his career some of the honors he was awarded were the Combat Infantry Badge, Parachutist Glider Badge, Master Parachutist Badge, Legion of Merit with 2nd Oak Leaf Cluster, and the Air Medal with 8th Award. In June of 1978, LTC Schneider retired from the Army and returned to Augusta, GA having been familiar with the area since he served as a Battalion Commander at Fort Gordon during the late 1960’s. During his retirement years, he enjoyed traveling the world, stayed physically active at the Post gym, enjoyed yard work, and volunteered. He was a rabid Cornhusker fan and actively attended games in Lincoln, and an occasional bowl game. One of his proudest moments was the twenty years he served as a volunteer at the Charlie Norwood VA Medical Center - Uptown Division. He was a congregant of the Post Chapel at Fort Gordon. He was predeceased by his wife Dorothy who passed away in 2016 after 63 years of marriage. LTC Schneider is survived by children Matthew and daughter-in-law Pamela Schneider of Winter Garden, FL, Paula Andersen and the late Kevin Andersen of Elkhorn, NE, and Katharina and son-in-law Dr. Jon Dewald of Kenly, NC, 6 grandchildren and 9 great grandchildren. Burial is scheduled at Arlington National Cemetery at a later date. Thomas Poteet & Son Funeral Directors, 214 Davis Rd., Augusta, GA 30907 (706) 364-8484. Please sign the guestbook at www.thomaspoteet.com

The family of LTC Howard E Schneider created this Life Tributes page to make it easy to share your memories.

Send flowers to the Schneider family.