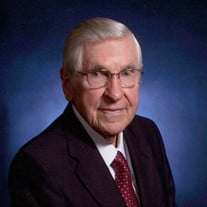 Hugh Kenneth Pratt, 95, entered into rest Wednesday, April 28, 2021. Mr. Pratt’s life was characterized by his generosity of spirit, service to his country and community, and devotion to his family and faith. He was born and raised in Covington, GA. He attended Georgia Tech prior to enlisting in the Army Air Corps in 1943, where he served as a bombardier navigator during World War II. After the war he entered Emory University, graduating in 1948 with a business degree. He was recalled to active duty in 1951 and served in the Korean War. Mr. Pratt was a founder of Pratt-Dudley Builders Supply Company, an enterprise to which he devoted much of his life. The business prospered under his leadership and grew into a local institution. He served as President until 1988 when his son Mark took over the role and continued serving as a board member of the company until his retirement. Mr. Pratt’s legacy includes a lifetime of contributions to his community. He was a member of St. Mark’s Methodist Church, where he served as a trustee and leader on numerous committees. He was a charter member of the Augusta Uptown Kiwanis club and a past president or director of many community and charitable organizations, including the Augusta Chamber of Commerce, Mental Health Association, Augusta Jaycees, and Building Material Merchants Association of Georgia. In addition, he was a committed political activist, serving as a member of the Columbia County Board of Elections and Chairman of the Republican Party of Columbia County, among other positions. Above all, he was a devoted and loving husband to his wife Carolyn and a caring father and grandfather. He enjoyed golfing, fishing, and visiting with his children and grandchildren. His memory will live on through his family, including his daughter Kathy Johnson (Danny); son Mark Pratt (Stephanie); grandchildren Carolyn Murray (Daniel), Joseph Johnson III (Kristen), Courtney Zuniga, Tyler Pratt (Kelsey), Hunter Pratt (Adriana); great-grandchildren Ben, Grayton, Parks, Emily, William, Alexandra, Marcella, Esmé, Naya, Hugo, Arya, Bennett and Emmy. Mr. Pratt and family would like to give special thanks to Lisa Gandy, his caretaker and treasured friend who provided companionship, assistance, and comfort in his final years. They are similarly indebted to Dr. Robert Shay and Rae Meyer for their unending care and generosity. The family will have a private graveside service at Westover Memorial Park. Memorial contributions may be made to St. Mark’s United Methodist Church (2367 Washington Rd, Augusta GA 30904) or to Community Foundation for the CSRA (720 St. Sebastian Way, Suite 160, Augusta GA 30901). Thomas Poteet & Son Funeral Directors, 214 Davis Rd., Augusta, GA 30907 (706) 364-8484. Please sign the guestbook at www.thomaspoteet.com

Hugh Kenneth Pratt, 95, entered into rest Wednesday, April 28, 2021. Mr. Pratt&#8217;s life was characterized by his generosity of spirit, service to his country and community, and devotion to his family and faith. He was born and raised in... View Obituary & Service Information

The family of Hugh Kenneth Pratt created this Life Tributes page to make it easy to share your memories.

Send flowers to the Pratt family.