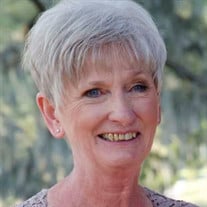 Jackie Brown, age 70, passed away peacefully on July 11, 2021, after a fierce and courageous battle with breast cancer. Jackie was born on January 6, 1951, in Augusta, Georgia, to Helen and Joe Crawford. She and her younger sisters and brother grew up on their family’s dairy farm near Appling, Georgia. In 1969, Jackie graduated from Harlem High School where she was a scrappy member of the basketball team. Jackie spent her life in Augusta, where her daughters Angie and Amy were born and where she met the love of her life, David Brown. Jackie and David were married in 1990 with their children, Angie, Amy and Jackie’s step-son, Travis, by their sides. They remained devoted to each other for the rest of Jackie’s life. Jackie spent over three decades serving the Augusta community as a dedicated employee of, first, Sunbelt Nissan, and, more recently, Miracle Nissan of Augusta. Her knowledge of Nissans, and cultivated relationships with dealerships across the Southeast, led to a league of dedicated customers who would only buy their cars from Jackie Brown. Jackie was a wife, mother, and car guru, but her heart belonged to the beach. Be it Tybee Island, Myrtle Beach, or her beloved Edisto, there was no where she was more at peace and joyful than sitting on the shore. If her beloved grandchildren where there, so much the better. It was with her grandchildren where she shone brightest. Mimi, as she is known to them, was always good for a clandestine treat, be it candies frowned upon by their parents or an impromptu shopping trip to buy whatever their hearts desired. Jackie is survived by her husband of 31 years, David Brown, her loving children Angie Smith (Wes), Amy Saccone (Brian), Travis Brown (Theresa), her four beloved grandchildren Ellie Smith, Harry Smith, Adeline Saccone, and William Saccone, her precious mother Helen Crawford, her sisters Bonnie Crawford, Sherry Axton (Warren), Lynn Kuhn (Ronnie), her brother Joe, Jr. (Vickie), and a plethora of extended family including nieces, nephews, aunts, uncles, and cousins. Jackie also leaves behind a multitude of remarkable and devoted friends. Jackie’s family will receive friends at 1:00 p.m. on Thursday, July 15, 2021, at Thomas Poteet & Son Funeral Directors in Augusta, Georgia. The funeral service will follow at 2:00 p.m. at Thomas Poteet & Son Funeral Directors, 214 Davis Rd., Augusta, GA 30907 (706) 364-8484. Please sign the guestbook at www.thomaspoteet.com

Jackie Brown, age 70, passed away peacefully on July 11, 2021, after a fierce and courageous battle with breast cancer. Jackie was born on January 6, 1951, in Augusta, Georgia, to Helen and Joe Crawford. She and her younger sisters and brother... View Obituary & Service Information

The family of Jackie Brown created this Life Tributes page to make it easy to share your memories.

Send flowers to the Brown family.