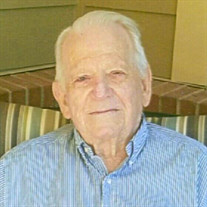 Grovetown, GA – Entered into rest on Wednesday, March 10, 2021, Mr. James Edwin Baldwin, 97. He was born to parents C.E. Baldwin and I. V. Ledford Baldwin in Naylor, GA. Survivors include his son, Gary E. Baldwin of St. Simons Island, GA and daughter Janet Caroline Baldwin of Martinez, GA, 6 grandchildren and 5 great grandchildren. He was preceded in death by his wife, the late Janet Smith Baldwin, and his son, the late James Edwin Baldwin, Jr. James Baldwin, known as “Ed”, was a Naval Aviator in WWII, a graduate of the Georgia Institute of Technology with a BSCE degree, was a principal of Naylor High School and Grammar School when he was 21 years old, having been granted a War Emergency Teacher’s certificate by the Lowndes County Board of Education. He was the first of his class of 1949 to become a registered engineer in Georgia and then relocated to Augusta in 1951 to open Baldwin Engineering Company. Ed became the Civil Engineer for the Augusta National Golf Club in 1958 and served in that capacity for 25 years. During his employment at the Augusta National he designed and supervised the construction of The Ben Hogan Bridge at the number Twelve Green, the Byron Nelson Bridge at the number Thirteen Tee, one of the earlier score board systems and underground storm drainage infrastructure. Ed was selected to become a member of the American Arbitration Association while in that position was selected by the City of Augusta on two occasions to act as their Arbitrator. He also acted as an Arbitrator for the American Arbitration Association on many other construction disputes throughout the Southeast. He served as a member of the following, the Augusta Richmond County Planning and Zoning Commission for 13 years and was Chairman for 7 years, the Richmond County Board of Equalization and was active in city and county political events, the American Society of Military Engineers, the National Society of Professional Engineers, the American Society of Military Engineers, the National Society of Professional Engineers, and the American Society of Civil Engineers. A former member of the Augusta Country Club, the Sand Hills Luncheon Club, and the Augusta Golf Association, was selected to become a member of the Marquee Who’s Who Publication Board in the South and Southwest in the 24th edition in 1995/1996. Ed eventually retired to his hunting lodge, the Pavillion de Chasse in Columbia County, GA and enjoyed many more days with his children, grandchildren, and great grandchildren. Ed will be loved and missed by all who ever met him. A private graveside service will be held at Westover Memorial Park. Thomas Poteet & Son Funeral Directors, 214 Davis Rd., Augusta, GA 30907 (706) 364-8484. Please sign the guestbook at www.thomaspoteet.com

The family of James Edwin "Ed" Baldwin created this Life Tributes page to make it easy to share your memories.

Send flowers to the Baldwin family.