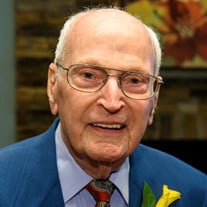 James “Jim” Stutts passed away May 11, 2022 at the age of 98. He was preceded in death by his wife, Hasellee “Lee” (Graham) Stutts, brother Frank Stutts, sister Lillian Patterson and brother Martin Stutts. He is survived by his daughters Terri Stewart (Ralph) and Jan Adkins (Tom), special family member Bea Wiggleton, grandchildren James William Stewart, Kate Graham Adkins and Taylor Adkins West (Jessie), great grandchildren Bethany Hope West and Jameson Thomas West. Jim was born in Rock Hill, SC on 12/23/23. He graduated from Rock Hill High School and enlisted in the Navy in November of 1942 and was chosen for the SeaBees. Jim served in the Hawaiian Islands building runways and on Guam building a hospital. He earned a Battle Star for the invasion of Guam. He was discharged December 1945. Jim earned a degree in Electrical Engineering from The Citadel. He met Lee on a blind date and they married 11/25/49 and celebrate 65 years of marriage before her death in 2014. Jim began his career at Springs Textiles in Lancaster, SC. He went on to work for Champion Paper in Canton, NC and Bowater Paper in Rock Hill, SC. Lee and Jim came to Augusta in 1964 when he joined a team that built Augusta Newsprint. After retiring in 1991 Jim continued to pursue his love of gardening. His camellias are in many yards in the Augusta area. A garden was named in his honor at Pendleton King Park in 2005. Our family would like to give special appreciation and thanksgiving to Geraldine Fulton and Sallie Taylor of Just Like Family for their loving care of our father. We would also like to thank the staff at Benton House of Augusta. In lieu of flowers, we would suggest considering memorial donations to Aldersgate United Methodist Church or the Augusta Camellia Society, 353 River Wind Dr. North Augusta, SC 29841. A visitation will be held at Thomas Poteet & Son Funeral Directors, 214 Davis Road Augusta, GA 30907 on Friday, May 13th, 2022 from 6:00-8:00 P.M. A graveside service will be held Saturday, May 14, 2022 at Westover Memorial Park at 11:00 A.M.

The family of James "Jim" Stutts created this Life Tributes page to make it easy to share your memories.

Send flowers to the Stutts family.