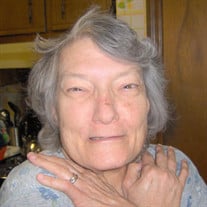 Not sure what to send?

Janet W. Shockey Hephzibah, GA – Janet W. Shockey, loving wife of SSG (Ret) David Shockey entered into rest on Saturday, March 19, 2022 at age 66. She is survived by her husband, David; Son, Terry and Daughter-in-Law Nikki who lives in Springville, Alabama; and 3 brothers: Michael, Kraig, and Kevin Wyckoff, who reside in Titusville, Florida. She also leaves behind numerous in-laws, nieces, and nephews. She was very proud of her Grand Daughter, Kristin and Great Grandkids, Callie and Jackson, also from Alabama. From the age of 10 years old Janet suffered from Type 1 Diabetes. She managed her diabetes well enough to teach English to Japanese students in the 70’s and worked at the bowling alley at Fort Gordon and McDonalds at the same time during the 1990’s. In 2010, she developed multiple myeloma and was treated at the MCG Cancer Center. She beat cancer this time, but it reared its ugly head again in 2015. Once again, she put up a courageous fight, but this time the cancer won. Her marriage to her husband was referred to as a Mickey Mouse romance due to the fact that they met in front of the Walt Disney World Castle in 1973 and were together ever since. Services will be on 24 June at 2:30pm at the Cape Canaveral National Cemetery in Mims Florida. In lieu of flowers, the family encourages donations to the Leukemia & Lymphoma Society. www.LLS.org or the American Diabetes Association. http://www.diabetes.org Thomas Poteet & Son Funeral Directors, 214 Davis Rd., Augusta, GA 30907 (706) 364-8484. Please sign the guestbook at www.thomaspoteet.com

The family of Janet W. Shockey created this Life Tributes page to make it easy to share your memories.