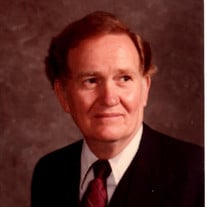 Jerrell Lester McNutt Grovetown, GA – Entered into rest on Thursday, October 21, 2021, Mr. Jerrell Lester McNutt, 94, was born December 19, 1926, in Dennis, Mississippi. He was the son of the late Thomas Nebraska and Lula May McNutt. At the age of 16 he felt led to be a preacher. He was a veteran of World War II and a member of the 6th Infantry Division in the Pacific. Jerrell earned a BA Degree from Mississippi College in Clinton, Mississippi and a Master of Theology Degree from the Southern Baptist Theological Seminary in Louisville, Kentucky. He earned the Master of Religious Education Degree from the New Orleans Baptist Theological seminary in New Orleans, Louisiana. He completed an Internship and Residency in Clinical Pastoral Education. In the early fifties he was pastor of Mt. Joy Baptist Church near Iuka, Mississippi. He started his career in hospital chaplaincy in 1955 and retired in 2005. He was classified as a Professional Chaplain in 1958. In 1968, he was certified as a Supervisor of Clinical Pastoral Education. Students under his supervision earned credit for various graduate degrees in theology. As a member of the East Alabama Old Car club, Jerrell had 2 Chevrolet cars, 1928 and a 1957. He was a member of the Auburn Lions club. He was a member of the Alabama Forge Blacksmith Council. Jerrell also enjoyed playing the piano and guitar. He is survived by his wife Vera Elizabeth Daugherty McNutt, daughters: Linda Joy Jones (Richard),Barbara Beth Vickery (Harvey William); son: Jerrell Lester McNutt, Jr. (Linda); six grandchildren and seven great grandchildren. He was preceded in death by his parents and 6 brothers: Paul, Milford, Noel, Ershell, Sherben and Orville McNutt and 3 sisters: Vera McNutt, Maude Wilson and Christine Oates as well as, 5 nephews and 3 nieces. The funeral service will be held Tuesday, October 26, 2021, at 11:00 A.M. in the chapel of Thomas Poteet & Son with Dr. David McKinley officiating. Interment will be Wednesday, October 27, 2021, at Ft. Jackson National Cemetery in Columbia, SC. In lieu of flowers memorial contributions may be made to the Leukemia Lymphoma Society, 2428 Persimmon Road, Augusta, GA 30904. The family will receive friends on Tuesday prior to the service from 10:00 until 11:00 A.M. at Thomas Poteet & Son Funeral Directors, 214 Davis Rd., Augusta, GA 30907 (706) 364-8484. Please sign the guestbook at www.thomaspoteet.com

The family of Jerrell Lester McNutt created this Life Tributes page to make it easy to share your memories.

Send flowers to the McNutt family.