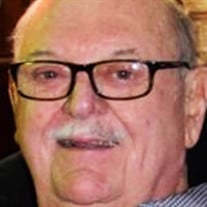 Augusta, GA – Entered into rest on Wednesday, January 19, 2022, Mr. Jerry L. Fisk, 80, loving husband of 44 years Helen B. Fisk. Additional family members include his daughter: Cherie Thompson (Gregg); sons: Michael C. Fisk and Richard Gregerson (Faris); 6 grandchildren; 1 great-grandson; his brother: Marshall Fisk (Ethylean); and several loved nieces and nephews. He is preceded in death by his sister: Sandra Marchand. Jerry retired as a conductor with CSX Railroad after 34 years. Jerry was an active member of The Augusta Shrine Club and he was a 60-year Mason from Hudson Lodge #373 F.& A. M. In 1966, he was the youngest Master of his Lodge at 25 years old, and raised five Master Masons. Jerry was the past President of the Augusta Shrine Club. He earned a number of awards including the “Merit Jewel Award” and “Shriner of the Year Award” for 2010 in Augusta and at the Alee Shrine Center in Savannah. Jerry was very active in fundraising projects and helped to organize events that raised over $10K every year. Jerry was known for his hard work, dedication and devotion to Shrinedom. He was a member of the CSRA Shag Club and an active member of Martinez Baptist Church. Memorial contributions may be made to Shriners Childrens’ Hospital, 950 W Faris Rd., Greenville, SC 29605 or to Martinez Baptist Church, 3632 River Watch Pkwy, Martinez, GA 30907. The funeral service will be held Monday, January 24, 2022, at 2:00 P.M. at Thomas Poteet & Son with Rev. Phillip Winsett officiating. Honorary pallbearers will be the Augusta Shrine Club. Private burial will follow. Pallbearers will be Jeff Herron, Eddie Herron, Gene Herron, Charlie Wagner and Ronnie Thomas. The family will receive friends on Monday at 1:00 P.M. at Thomas Poteet & Son Funeral Directors, 214 Davis Rd., Augusta, GA 30907 (706) 364-8484. Please sign the guestbook at www.thomaspoteet.com

The family of Jerry L. Fisk created this Life Tributes page to make it easy to share your memories.

Send flowers to the Fisk family.