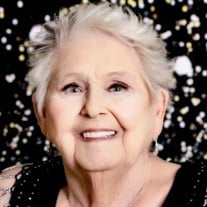 Augusta, GA – Johanna (Josie) Dresser passed from this world into the next on Tuesday, 4 January 2022. She was 86 years young. Josie was born in Kilkenny, Ireland on 30 September 1935 to John and Elizabeth Reid. At an early age she moved to St. Albans, England with her parents and two sisters, Francis and Elizabeth. She lived in St. Albans until she married an American Airman in 1955. From there she had six children and lived in England, Italy and South Dakota until the family settled in Illinois. In the early 70’s, Josie ended up being the sole breadwinner and provider for her six children. She worked as a waitress for many years and did some custodial work for the local school district until all her children were grown and out on their own. At that time, she moved to Los Angeles, CA where she worked as a housekeeper for a prominent Judge and Lawyer. Josie retired to Sun City, AZ where she spent her time reading, watching TV and knitting. She also joined a few social clubs and enjoyed playing cards as well as traveling and seeing the world. In December of 2019, due to ill health she moved to Augusta, GA to live with her daughter and son-in-law. As her health declined, she moved to a nursing home and lived there until she passed on. Josie was preceded in death by her parents, her sister Francis, her son Petey, and her grandson Johnny. She is survived by her sister Elizabeth, her cousin Ann, her daughter and son-in-law Maria and Eddie, her son and daughter-in-law James and Kim, and her son Michael. Plus, eight grandchildren and eleven great-grandchildren. Josie didn’t have an easy life, but she did have a full life. She has been more places and did more in her life than many people have, a fact she was very proud of. Her friends and family wish to celebrate her life and wish her well on her continued journey into the unknown.

Augusta, GA &#8211; Johanna (Josie) Dresser passed from this world into the next on Tuesday, 4 January 2022. She was 86 years young. Josie was born in Kilkenny, Ireland on 30 September 1935 to John and Elizabeth Reid. At an early age she moved... View Obituary & Service Information

The family of Johanna Dresser created this Life Tributes page to make it easy to share your memories.

Send flowers to the Dresser family.