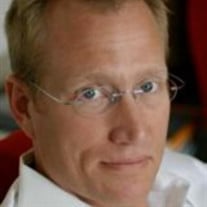 November 2, 1961 – June 01, 2021 John Charles Garrard, of Augusta, Georgia, died unexpectedly on June 1, 2021. He was born on November 2, 1961 in Athens, Georgia, to the late Rev. William R. Garrard, Sr. and Guinelle Cooper Garrard, of Hickory, NC. As the son of a United Methodist pastor, he grew up in Athens and Rabun County, Georgia. He is survived by his wife of 24 years, Regina Gardner Garrard and his son Zachary Reese Garrard. Also surviving are his brother Rev. William R. Garrard, Jr., wife Frances, of Hickory, NC; sister Jill Garrard Hicks, husband David, of Waterdown, Ontario; seven nieces and nephews and five great nieces and nephews. His beloved sister Janice Garrard preceded him in death. John’s creative abilities were apparent early on as a young boy living in Rabun county where he was one of the writers of the Foxfire book series. While struggling as the “city kid” in the North Georgia mountains, John was introduced to tennis by his brother-in-law David. John went on to win the Georgia state high school doubles tennis championship and eventually earned a tennis scholarship to Young Harris College. After transferring to Winthrop University, he joined their varsity tennis team and later graduated with a degree in communications and a minor in history. His love of all things tennis was lifelong and forged many friendships not only in the local tennis scene but also nationally and internationally. John used his gifts in creative marketing and project management working primarily in the health care setting including University Hospital, Healing Hands Physical Therapy, and the United States and Canadian Academy of Pathology in Augusta. He was also the founder of Bestbrandz, a brand development company. He chose the unusual spelling to honor his son Zachary. In his last position as Vice President of Marketing and Membership for the Greater Augusta Family YMCA, he found a place of Christian ministry in an atmosphere of mutual support and higher purpose. John was a person of deep faith relying on Christ for strength in the midst of life’s joys and struggles which started in the home of his parents who founded a Christian retreat center, Covecrest, in Tiger, Georgia. This faith was lived out in his love and dedication to his wife Regina and their son Zachary through many challenging times, most recently while recovering from multiple surgeries. John remained hopeful during this time and was determined to return to the tennis court which he did briefly. He also found great joy interacting with his many dogs, most recently with his Labrador retriever, Rafa, named for one of his tennis favorites, Rafael Nadal. John will be truly missed not only for his creative life energy and passionate heart for anything he set his mind to but also for his tireless efforts to help his son grow up in love and navigate the world with autism. John was a member of Stephens Creek Church where he served in the prayer ministry as he strongly identified with the longings of the requests for God’s intercession. We rejoice in his passion receiving his final reward in Christ Jesus our Lord. A memorial service with be held on Tuesday June 8th at two o’clock in the Atrium of Stevens Creek Church, 600 Stevens Creek Rd. Augusta, GA 30907.The family will greet those in attendance following the service. "In lieu of flowers, memorial contributions may be made to the following The Greater Augusta Family YMCA, http://thefamilyy.org/donate/campaign/72/ or to the Immaculate Conception Catholic School of Special Needs, In Memory of John Garrard, 811 Telfair Street, Augusta, GA 30904. Thomas Poteet & Son Funeral Directors, 214 Davis Rd., Augusta, GA 30907 (706) 364-8484. Please sign the guestbook at www.thomaspoteet.com

The family of John Charles Garrard created this Life Tributes page to make it easy to share your memories.

Send flowers to the Garrard family.