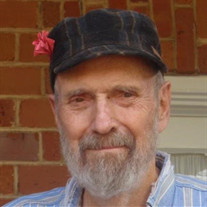 John William Hamilton Hephzibah, GA - John William Hamilton passed away on March 1, 2021 at the age of 90. John was born on April 6, 1930, the third of five children. He grew up in Manhasset, New York, and attended Central College in Missouri. After college he served with the U.S. Army in Korea. He then continued his graduate education at Emory University, and received a PhD in psychology from Florida State University. John spent most of his career devoted to the clients at Gracewood State School and Hospital. He was also involved in pioneering research at Harvard University, helping people with developmental disabilities. John was a creative and independent thinker, and positively changed the lives of countless families. John was a man of many talents and interests. He was a kind and caring person, always seeing the best in everyone. John loved the arts and music. He played the violin, piano, and flugelhorn. He spent much time building and repairing things in his workshop with the Saturday opera blasting through the backyard. Children and animals were always drawn to John. He was a loving and playful father and grandfather, with endless patience. John is survived by his beloved first wife, Annie Blount Hamilton and his two children, Sarah Lee Hamilton (David Boyd Zuckermann) and William Blount Hamilton (Bryn Gardner Hamilton). He also had four grandchildren: Lila Anne Zuckermann, Rosalie Grace Zuckermann, William Blount Hamilton, Jr., and Wesley Catherine Hamilton. He was preceded in death by his second wife, Eleanor Hall Hamilton. He is also survived by his close friends, Susan and Wendell Johnston. Since John loved animals so much, his family would like to support the non-profit organization that “helps people help animals.” In lieu of flowers, donations can be made to That’s What Friends Are For, Inc., P.O. Box 9490, Augusta, GA 30906. There will be an on-line memorial service in the coming weeks. Please send contact information to: Lee Hamilton, 510-965-8042, [email protected] Thomas Poteet & Son Funeral Directors, 214 Davis Rd., Augusta, GA 30907 (706) 364-8484. Please sign the guestbook at www.thomaspoteet.com

John William Hamilton Hephzibah, GA - John William Hamilton passed away on March 1, 2021 at the age of 90. John was born on April 6, 1930, the third of five children. He grew up in Manhasset, New York, and attended Central College in Missouri.... View Obituary & Service Information

The family of John William Hamilton created this Life Tributes page to make it easy to share your memories.

Send flowers to the Hamilton family.