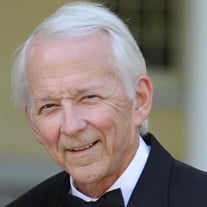 Augusta, GA - John “Jack” Emile Johannsen, Jr. entered into rest on December 19, 2020 surrounded by his loving family. He was preceded in death by his parents, John Emile Johannsen, Sr. and Leonora Meredith Johannsen. He is survived by his wife, Genie Summerall Johannsen, his daughters, Alison Parrish (Craig), Ashley Fisher (Brendan), his grandchildren, John Parrish, Will Parrish, Ali B Fisher, Frank Fisher, and Martha Bet Fisher, a brother Patrick Johannsen Sr. (Cheryl), his nephews, Patrick Johannsen, Jr. and Steve Johannsen (Tracy), and a niece, Kim Fulmer (Chip). Survivors also his sister-in-law, Deryle Rodgers (Ken) and nephews Chip Renno (Tammy), Robbie Renno, and Kevin Renno (Beth). He is also survived by cosuins Florence Booker Chandler and Suzanne Phillips and their families. He has several great nephews and one great niece. A native of Augusta, “Jack,” as he was known, was born at University Hospital on November 26, 1944. He received his First Eucharist and was baptized, confirmed, and married at Sacred Heart Catholic Church. He attended first through eighth grades at Sacred Heart Catholic School and graduated from Aquinas High School in 1962. He was a member of the first senior class to graduate from Augusta College in 1967. He joined the United States Army National Guard in 1967 and Sargent Johannsen received his honorable discharge six years later. He married his wife of 51 years on October 26, 1969. He became a member of Saint Mary on the Hill Catholic Church in 1971, when Sacred Heart Catholic Church was closed. Jack was a faithful Catholic who attended daily Mass on a regular basis for over 30 years. He was a Banking Officer and Branch Manager of Citizens and Southern National Bank which is now Bank of America. He was Regional Manager, Pine Lumber Purchasing for Georgia Pacific Corporation, managed the lumber buying office at Wickes Corporation and Builder Marts of America before joining McGowan White Lumber Co. Inc. as Vice President and part owner in 1979. He was a member and past President of the Aquinas Booster Club and past member of the Board of Directors of the Augusta College Alumni Association. He was a member of the Augusta Country Club and the Augusta Golf Association. Jack was an incredibly devoted husband, father, grandfather, brother, uncle, and friend. He took great pride in watching his grandsons play football and baseball and rarely missed a game. He also enjoyed cheering for the Georgia Bulldogs and the Aquinas Fighting Irish football teams. A dedicated friend, Jack truly enjoyed helping others, especially in recent years. Calling upon his strong Catholic Faith, Jack was gracious and fearless throughout his fight. The family would like to thank Dr. Don Loebl Jr. for his compassionate care and friendship. The Johannsen family is also extremely grateful for the pastoral care of Father Mark Ross. A memorial Mass will be held at St. Mary on the Hill Catholic Church, 1420 Monte Sano Avenue, Augusta, GA on Monday, December 21, 2020 at 1:00 P.M. with Fr. Mark Ross celebrant. Members of the Augusta Golf Association will serve as honorary pallbearers. Committal will follow in the St. Mary’s columbarium. The family will receive friends on Sunday evening from 5:30 until 7:00 P.M. at Thomas Poteet & Son. The family respectfully requests that everyone wear a mask, both at the visitation and the service. In lieu of flowers, the family requests memorials be made to Aquinas High School, 1920 Highland Avenue, Augusta, GA 30904. Thomas Poteet & Son Funeral Directors, 214 Davis Rd., Augusta, GA 30907 (706) 364-8484. Please sign the guestbook at www.thomaspoteet.com

Augusta, GA - John &#8220;Jack&#8221; Emile Johannsen, Jr. entered into rest on December 19, 2020 surrounded by his loving family. He was preceded in death by his parents, John Emile Johannsen, Sr. and Leonora Meredith Johannsen. He is survived... View Obituary & Service Information

The family of John "Jack" E. Johannsen, Jr. created this Life Tributes page to make it easy to share your memories.