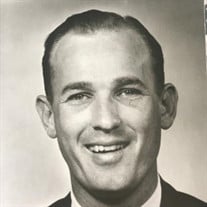 Larry Brantford Ross Larry Brantford Ross, 81, after an extended illness died peacefully on Saturday, February 6, 2021. Survivors are his devoted and loving wife of 64 years, Virginia Dare Harris of Augusta; six children, Rev. Mark Ross, Col. (Ret.) Christopher (Peggy) Ross, Laurie (Dan) Watts, Beth Ross Ramirez, Anne (Stan) Fox, and Kathy (John) Herman. A native and lifelong resident of Augusta, GA, Larry joined the U.S. Navy at age 17 and spent 3 years serving on an aircraft carrier, the USS Saratoga, in Pensacola, FL. After returning home, he had a variety of jobs to include an eight-year period as an Augusta City Police Officer and then as a Richmond County Deputy Sheriff. Before and after his time in law enforcement, Larry worked as a very successful sales agent for the Prudential Insurance Company. He ended his career with Prudential as an award-winning District Sales Manager. He was an avid outdoorsman who loved the tug of a largemouth bass on a taunt fishing line and the strained point of a good bird dog on a covey of quail. A man of modest means but rich in the things that transcend money and possessions, Larry’s work allowed him to touch the lives of many individuals. He would regularly spend hours on the phone listening to the problems of others who needed his help. He had a heart for those who struggled with life. In his later years, he would enjoy the time spent with 23 grandchildren and then 23 great grandchildren. His smile was warm and welcoming, he had an infectious sense of humor, and he always had a genuine interest in the lives of his family and of those who crossed his path. He was much loved by his family and friends and will be forever remembered and missed. The family thanks the nursing and staff at Westwood Extended Care, Dr. George Pursley, Heartland Hospice, and Dr. Andrew VanAlstine, for the excellent care and attention given to Larry over the past three years. The Mass of Christian Burial will be this Thursday, February 11, 2021 at the Church of the Most Holy Trinity. Due to the pandemic the service will be private. In lieu of flowers, you may make contributions of remembrance to the Church of the Most Holy Trinity, P.O. Box 2446, Augusta, GA 30903, or to Catholic Social Services, 811 12th Street, Augusta, GA 30901, or to any charity of your choosing. Thomas Poteet & Son Funeral Directors, 214 Davis Rd., Augusta, GA 30907 (706) 364-8484. Please sign the guestbook at www.thomaspoteet.com

The family of Larry Brantford Ross created this Life Tributes page to make it easy to share your memories.

Larry Brantford Ross, 81, after an extended...

Send flowers to the Ross family.