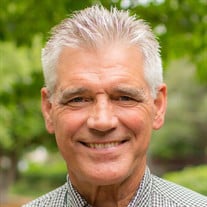 Lloyd A. Hedlund, 74, of Augusta, GA, died peacefully at his home on January 11, 2022, following a long battle with cancer. Lloyd grew up in Mount Vernon, WA, as the son of the late Stanley and Velma Hedlund. He met his wife of 54 years, Vicki, during his high school years. They married while he attended Washington State University where he received his BS degree in chemical engineering. His career took him to Shell Oil in Anacortes, WA, then to Houston, TX, where he was introduced to Tom Belt who ultimately led him to Augusta to join the Alleluia Community. He subsequently took a position at the Savannah River Site in Augusta, GA. Lloyd was well known as an avid follower of the Lord and would frequently be found encouraging others to get to know and follow Jesus. He shared his passion with the Kairos Prison Ministry, his cycling buddies and all who would listen. While playing worship music, he would be found praying for the unborn, doing Walks for Life, participating in Holy Friday crosswalks and March for Jesus events. In the Alleluia Community, he served on the intercessory and spiritual warfare ministry teams, the governmental council for 10 years and in 2012 he was designated an Elder. He and Vicki enjoyed having household with several young people, particularly Dottie Wesley. She lived with them for 13 years and remains a loyal family friend. As a member of Ascension Lutheran Church, Lloyd served on the church council, led vacation Bible school and served on the church Sunday school program. His other activities included camping, hiking, century rides, grilling out for his family and friends, plus giving help to anyone in need. Lloyd will be remembered by his love and adoration for his family, church members and his friends, constantly fostering activities for fellowship. This legacy of love is recognized and embraced as an example for future generations. Lloyd is survived by Vicki, his loving and supportive wife of 54 years; son: Jason (Georgia) and grandchildren: Miranda, Keaghan, Keleigh, Merrick, Koulter, and Kiernan; son: Jeramy (Whitney) and grandson: Bryce. His parents, Stanley and Velma Hedlund are deceased as well as a brother; Craig Hedlund. Two other brothers, Robert and Jim, still reside in Washington. We are comforted in knowing Lloyd had a life well lived and well loved. We send him off to Glory with love, knowing we will be one day reunited in heaven. A Celebration of Life will take place at the Alleluia Community gymnasium, 2819 Peach Orchard Rd., Augusta, GA 30906 on Sunday, January 16, 2022, at 7:00 P.M. The visitation will begin at 6:30 P.M. A funeral service will be held on Monday, January 17, 2022, at 10:00 A.M. at Ascension Lutheran Church, 2860 Wells Drive, Augusta, GA 30906. Interment will follow at the Alleluia Community Cemetery. Memorial contributions may be made to Alleluia Christian Service Center, Inc. 2110 Richards Rd., Augusta, GA, 30906 Lloyd’s family greatly appreciates your prayers and comforting support. They ask that you post your favorite memories of Lloyd to www.thomaspoteet.com.

Lloyd A. Hedlund, 74, of Augusta, GA, died peacefully at his home on January 11, 2022, following a long battle with cancer. Lloyd grew up in Mount Vernon, WA, as the son of the late Stanley and Velma Hedlund. He met his wife of 54 years,... View Obituary & Service Information

The family of Lloyd A. Hedlund created this Life Tributes page to make it easy to share your memories.

Send flowers to the Hedlund family.