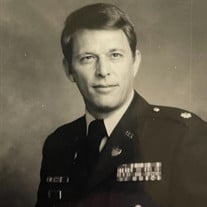 LTC Michael S. Keck, U.S. Army (Ret.) Augusta, GA –LTC Michael S. Keck, U.S. Army (Ret.), 76, entered into rest on Friday, November 12, 2021. Born on June 5, 1945, in Pensacola, Florida, Mike was the son of the late George Melvin and Lucille Keck of Dodge City, Kansas. Mike met his beloved wife, Karen (Sutton) in high school and they married 54 years ago in Dodge City. Mike was a graduate of Dodge City High School (Class of 1963), and received his BA from Emporia State University, where he was on the Golf Team, in May, 1967. Mike entered the US Army in 1968; he graduated from Officer Candidate School (OCS) in Fort Sill, Oklahoma as a Field Artillery Officer before being sent to Vietnam in November, 1969. Mike was awarded the Bronze Star with Oak Leaf Cluster and other Meritorious Service Medals before retiring from Fort Gordon, Georgia in 1991. Upon retirement from the US Army, Mike shifted gears and started a second career as an Investment Representative with Edward Jones until his retirement in 2010. While still on Active Duty, Mike was an Aide for Kansas Governor John W. Carlin at the Inauguration of Ronald Reagan in 1985. Mike was a longtime member of the American Legion, MOAA (Military Officers Association of America), VFW (Veterans of Foreign Wars), and the Augusta West Rotary Club, where he was a Paul Harris Fellow. Mike was a good and loving husband, father, and grandfather. He loved his family and his country. He will be missed by all who knew him. Mike is survived by his daughter, Amy Michelle, her husband, Jeff, and their two daughters, Madison and Caitlin; his son, Jeffrey Michael, his wife, Joanne,and their three sons, Carson, Connor, and Caleb, and their daughter, Cassedy; his brothers Greg (Lynn), and Jeff (Beth), and his sister-in-law, Marta Dark. In lieu of flowers, memorial contributions may be made to the Forces United, formerly known as Augusta Wounded Warriors, 701 Greene St., Suite 104, Augusta, GA 30901. The funeral service will be held Saturday, November 20, 2021 at 2:00 P.M. in the chapel of Thomas Poteet & Son. Interment will follow in Bellevue Memorial Gardens. The family will receive friends one hour prior to the service, beginning at 1:00 P.M., at Thomas Poteet & Son Funeral Directors, 214 Davis Rd., Augusta, GA 30907 (706) 364-8484. Please sign the guestbook at www.thomaspoteet.com

The family of LTC Michael S. Keck, U.S. Army (Ret.) created this Life Tributes page to make it easy to share your memories.