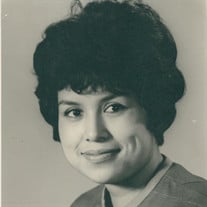 EVANS, GEORGIA — On Sunday, May 23, 2021, Maria D. Eichenberger - Seage, passed away at the age of 84. Maria was born on January 4, 1937, in Yodocono, Oaxaca, Mexico to Higinia Melgar and Ines Martinez. Her father would pass away when she was young, and she would be raised by her mother and stepfather Florentino Ybarriola. Maria moved to Cuernavaca. Morelos, Mexico at age seven. She loved the community of Flores Magon where she grew up with her six sisters and lived an exciting life. Maria would travel to Munich, Germany. She would marry Grover L. Johnson and have three children with him. They returned stateside and lived in Maryland, Pennsylvania, and Texas. While in Texas, Maria became a U.S. citizen in 1974. Maria would divorce and relocate with her children to Arizona. Maria arrived in Sierra Vista, Arizona in October of 1976. She would marry Earl R. Eichenberger that same year. Maria loved her life in Sierra Vista. She would join Beta Sigma Phi in 1977, she was a member for over 40 years. Maria gained a group of sisters who were with her through good and bad times. She would also meet her partner in crime, Patricia. These two ladies were known throughout town for being garage sale ladies. Every Saturday they could be seen traveling through town going to every garage sale possible. Like clockwork, they would stop for breakfast at Little Bits. Maria also enjoyed her time spent at Cochise Fitness Center, especially her time with pal Julia. Maria also volunteered at The Fort Huachuca Thrift Shop for over 40 years. She was a member of the Fort Huachuca Officers’ Wives Club. Maria used to teach cooking to members of the club and her friends. She was extremely proud of all the community service she performed. Maria would lose her beloved Earl in 1988. Maria would travel but always return to Sierra Vista and the friends she adored. She loved to visit her family in Mexico and her children wherever they were located. She would later marry Frederick H. Seage. Fred and Maria loved to travel. They had a good life together and created a family until the horrible disease of dementia entered their lives. Maria is preceded in death by Earl R. Eichenberger, her son, Calvin R. Eichenberger, her parents, her sisters: Conchita and Florentine, and her stepsons: Matthew, and Thomas Seage. She is survived by Fred Seage, her sons Alberto (Theresa) Martinez and Andres Ybarriola, her daughters, Monica (Brett) Picard of Tucson, Ruth (Brian) Merrick of Evans, Georgia, her grandchildren: Justin and Taylor Picard, Morgan, Nicholas (Faith), and Joshua Merrick, great-grandchildren Olivia Picard, Blake Chait-Merrick and Tristan Merrick, her stepchildren: Michael (Lori), Doug (Rose) and David Seage, step-grandchildren: Michelle, Christopher (Sarah), Heather, Krista, Anthony (Jessica), Erin, Thomas (Maria) and seven step-great-grandchildren and her sisters: Juana, Estella, Ines and Josephina, and numerous nieces, nephews, their spouses, children, friends and her dog Orchid. A Mass will be held for her, Wednesday, June 2, 2021, at 10:30 A.M. at St. Andrew the Apostle Catholic Church, Sierra Vista, Arizona, with Fr. Gregory Adolf officiating. Masks are required. Inurnment will follow at the church’s prayer garden. Reception luncheon to follow inurnment. Thank you to the staff of Kindred Hospice, especially Tonya, Karen, and Ruthie. Thomas Poteet & Son Funeral Directors, 214 Davis Road., Augusta, GA 30907 (706) 364-8484. Please sign the guestbook at www.thomaspoteet.com

The family of Maria D. Eichenberger created this Life Tributes page to make it easy to share your memories.

Send flowers to the Eichenberger family.