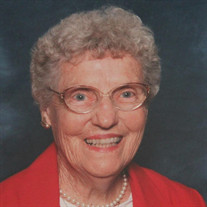 Mrs. Mary Jane Breckenridge, 94, entered into rest April 18, 2021. Mary Jane was born August 28, 1926 to the late William Edward Aitken and Helen Margaret McClenaghan Aitken of Harrisburg, PA. She was preceded in death by her husband of 40 years, Jack Clark Breckenridge, whom she married on June 28, 1945. Survivors include daughters Susan B. Alexanderson (Walter) of Augusta, and Linda Diane Breckenridge of Willits, CA, son Kenneth Clark Breckenridge (Rose) of Summertown, TN; three granddaughters, Tracy A. Robins of Augusta, Alanna Breckenridge (Jamus) of Atlanta, Pearl Breckenridge (James) of Gainesville, FL; two grandsons, Abraham Breckenridge and Jake Breckenridge (Monica) of Jensen Beach, FL; 7 great grandchildren, and two great-great grandsons. A memorial service will be held in July at Trinity on the Hill UMC. Mary Jane was raised in Harrisburg, PA. At the end of WW II, she married Jack Breckenridge and they moved to Seaford, NY. She lived in Seaford until 1969 when she and Jack moved to Stuart, FL. In October 2001 she moved to Augusta. Along with taking care of her family, Mary Jane was a bird lover and conservationist her entire life. In 1990, she was presented an award by the Stuart/Martin County Chamber of Commerce for the “Most Individual Effort” in the Coastal Cleanup Program. Mary Jane was an active member of Trinity on the Hill UMC. She was a member of the Sanctuary Choir, an original member of the Prime Time Singers, and a member of the Robert Taylor Sunday School Class. Over the years, she was a faithful participant in numerous small group Bible studies. Mary Jane was a volunteer with the Friends of the Augusta Symphony and in 2016 was named the first annual Friends of SOA Volunteer of the Year. If so desired, memorial contributions may be made to the Music Ministry of Trinity on the Hill UMC, 1330 Monte Sano Ave., Augusta, GA 30904 Thomas Poteet & Son Funeral Directors, 214 Davis Rd., Augusta, GA 30907 (706) 364-8484. Please sign the guestbook at www.thomaspoteet.com

Mrs. Mary Jane Breckenridge, 94, entered into rest April 18, 2021. Mary Jane was born August 28, 1926 to the late William Edward Aitken and Helen Margaret McClenaghan Aitken of Harrisburg, PA. She was preceded in death by her husband of 40... View Obituary & Service Information

The family of Mary Jane Breckenridge created this Life Tributes page to make it easy to share your memories.

Send flowers to the Breckenridge family.