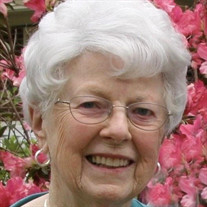 Mary Reynolds Martin Augusta, GA – Mary Martin, a resident of Augusta for 65 years, died peacefully at her home on December 6, which would have been her husband’s 101st birthday, surrounded by loving family members and caregivers. She was 96 years old. Mary was born and grew up in Niagara Falls, NY. While working for DuPont there, she met the love of her life, Dan Martin. They were married in 1945. Dan died unexpectedly during surgery three weeks after their 73rd wedding anniversary at age 98. Mary and Dan established their residence in Augusta when Dan was transferred by DuPont to the Savannah River Plant near Aiken, SC. Mary and Dan were active members of Aldersgate United Methodist Church since its founding in the mid-60s. They were involved in a variety of ministries such as the Senior Saints, and Mary was part of various women’s activities. Music was one of Mary’s many talents, including playing the organ. In the 60s and 70s, she provided musical therapy for children with special needs at Lyndale, a community support service. Her contribution there was recognized in a special event in 1977. She was also known for her baking, and some of her recipes were even published locally. Mary and Dan participated for over 50 years in square dancing, including joint leadership roles, locally and state-wide. They were involved in starting square dancing clubs in Augusta, and served as the first President of the local Masters City Squares. From 1978 to 1980, they were President of the Georgia State Square Dancing Association (GSSDA). An excellent seamstress, Mary designed and made all her square dance dresses and matching vests for Dan, including a special peach dress for a celebratory event in Washington DC as part of President Jimmy Carter’s inauguration in 1977. That dress was duplicated and worn by all the women at the square dance. After Dan’s retirement from DuPont, until they were in their 80s, Mary and Dan did extensive traveling across the U.S., Europe and Asia. Travel was a vital part of their lives. Mary is survived by three children, six grandchildren and three great-grandchildren. The children are: Robert (Sheree) Martin of Atlanta; Sandy (Ron) Blount of Watkinsville, GA; and David (Melinda) Martin of Vancouver, Washington. The grandchildren are: Scott Martin of Griffin, GA; Page (Ben) Guillot currently living in Paris, France; Laura (Wade) Meredith and Mark Bouldin of Atlanta; Caitlin Martin and Miriam (Eric) Halliday of Portland, Oregon. The great-grandchildren are Emma Guillot and Jack Lynden Guillot from Paris, and Jaden Flynn from Athens, GA. The family thanks Home Instead Senior Care of Augusta who provided excellent in-home care over the last few years, and also Heartland Hospice of Augusta. Due to the coronavirus, a brief visitation followed by a graveside service will be primarily for family. A memorial service is being planned in conjunction with the 2021 Masters when all of Mary’s family are expected to be in Augusta. In lieu of flowers, donations could be made to the Aldersgate Memorial Missions Endowment Fund in honor of Mary Martin, Aldersgate Church, 3185 Wheeler Rd; Augusta, GA 30909. Dan and Mary established that Fund in 2014 to provide supplies for overseas mission trips. Thomas Poteet & Son Funeral Directors, 214 Davis Rd., Augusta, GA 30907 (706) 364-8484. Please sign the guestbook at www.thomaspoteet.com

Mary Reynolds Martin Augusta, GA &#8211; Mary Martin, a resident of Augusta for 65 years, died peacefully at her home on December 6, which would have been her husband&#8217;s 101st birthday, surrounded by loving family members and caregivers.... View Obituary & Service Information

The family of Mary R. Martin created this Life Tributes page to make it easy to share your memories.

Send flowers to the Martin family.