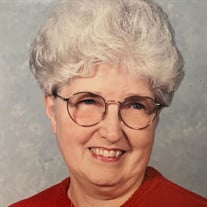 Mary O. Thompson Augusta, GA – Mary O. Thompson, 87, passed away December 27, 2020 with her daughters by her side. Born September 3, 1933 in Augusta, Ga she was the daughter of the late Guy Ashby and Lee Agee McKenney. Mary attended high school at Richmond Academy in Augusta. After graduation she married and had 3 children Donna, Linda and Janet. Mary was a lifelong member of Central Christian Church on Crawford Ave. In her early years she worked at the Gas company. She then worked many years at Friedman’s Jewelers on Broad St. and then finally retired from the Regency Mall Friedman’s Jewelers location. After retiring Mary went back to work for several years at the Kroger on Washington Rd. She was preceded in death by her parents, Guy Ashby and Lee Agee and her beloved siblings, Walter, Joe and Elizabeth Dykes (also known lovingly as Sister). She was also preceded in death by her son-in-law, Joseph H. Rachels, grandson, Jake N. Peninger and grandson, Aaron J. Rachels. Mary was loved by many and everyone called her “the sweetest person they know”. Kindness was her nature and she always put others before herself. “Do unto others as you would do to yourself” was a motto she lived by. In her final years Mary resided at the Keysville Nursing Home and Rehab in Keysville, Ga. They fondly remember her as again, “the sweetest person”. She was known for always singing and humming hymns. The hymns were her favorite and she somehow remembered them and would hum and sing throughout the day. The family would like to thank the staff of Keysville Nursing Home and Rehab for all of the wonderful care and love they gave her over the last few years. She was well cared for and they showed her such compassion up until the very end. They truly loved her as if family. Mary is lovingly remembered by her daughters: Donna Peninger (Buck), Linda Morbit (Joe) and Janet Sewell (George); grandchildren, Katie Peninger, Josh Peninger, Austin Rachels, Ben Morbit; and great grandchildren: Alexis Brown, Chloe Brown, Hailey Peninger and Jacob Peninger. A family service will be held Thursday, December 31, 2020 at 10:00 A.M. at Thomas Poteet & Son Funeral Directors. The family will receive friends beginning at 9:00 A.M. Thursday morning at Thomas Poteet & Son Funeral Directors, 214 Davis Rd., Augusta, GA 30907. Please sign the guestbook at www.thomaspoteet.com.

Mary O. Thompson Augusta, GA &#8211; Mary O. Thompson, 87, passed away December 27, 2020 with her daughters by her side. Born September 3, 1933 in Augusta, Ga she was the daughter of the late Guy Ashby and Lee Agee McKenney. Mary attended high... View Obituary & Service Information

The family of Mary O. Thompson created this Life Tributes page to make it easy to share your memories.

Send flowers to the Thompson family.