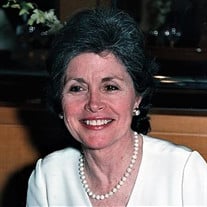 Mary Livingston Goodwin, age 77, affectionately known as Mickey, of Augusta, Georgia, passed away December 16, 2021, at home surrounded by family after a courageous battle with ALS. She was only surpassed in beauty and grace by her identical twin sister Victoria Livingston Shaw, who proceeded her in death February 10, 2014. Mickey was born April 30, 1944, to the late Emma Lyne and C.E. “Buster” Livingston. She is survived by her husband Dr. H. North Goodwin; son Dr. Henry N. Goodwin, Jr. and wife Patricia; daughter Victoria Boardman and husband Braye; and grandchildren Braye Camden Boardman, Jr; Hollis Livingston Boardman; Henry North Goodwin III; and Isabelle Walker Goodwin. She is also survived by her brother Robert Rutledge Livingston (Joyce) of Hendersonville, NC; sister Ann Livingston Pouch of Tuxedo, NC; sister Martha Livingston Burchenal of Cincinnati, OH; brother-in-law Bartow S. Shaw of Sumter, SC; brother-in-law Charles Johnston Goodwin (Winn); sister-in-law Selly Maxwell Goodwin; and numerous cousins, nieces, and nephews. She was preceded in death by her parents; her twin sister Vickey; in-laws Dr. and Mrs. Thomas Wright Goodwin; brother-in-laws Thomas Wright Goodwin, Jr. and his wife Grace; Robert Roy Goodwin II; Edgar Duryea Pouch; Ralph Rogan Burchenal; sister-in-law Carol Berry Livingston; and nephews Robert Rogan Burchenal and Cooper Livingston Burchenal. Mickey was a direct descendent of Philip Livingston, a signer of the Declaration of Independence. She was a longtime member of Saint Paul’s Episcopal Church where she served on the Flower Guild. She was a member of the Colonial Dames, Augusta Assembly, Augusta Heritage Club, Junior League of Augusta, and two garden clubs: Bulbs and Borders and Sand Hills. She also served on the Boards of Augusta Preparatory Day School and Mary Warren Home. Mickey will be remembered as a loving wife, mother, and grandmother. Her warmth of spirit and charisma for life was evident to all who knew her. She treated everyone with respect, even those marginalized from society. She had a particular interest in helping women recovering from substance abuse at Hope House of Augusta. She was passionate about sharing her love of gardening to landscape that facility. Being an identical twin made sharing second nature for Mickey. She always put the needs of others first, before her own. This continued to her final days. She never complained about her illness, and she maintained her dignity to the end. A memorial service will be held at St. Paul’s Episcopal Church Saturday, December 18, 2021, at 2:00 PM with the Reverend Eric Biddy officiating. The family will hold a private graveside service at a later date. In lieu of flowers, memorials can be sent to Hope House of Augusta – Landscape Fund, 2205 Highland Ave, Augusta, GA 30904.

Mary Livingston Goodwin, age 77, affectionately known as Mickey, of Augusta, Georgia, passed away December 16, 2021, at home surrounded by family after a courageous battle with ALS. She was only surpassed in beauty and grace by her identical... View Obituary & Service Information

The family of Mary Warren Livingston Goodwin created this Life Tributes page to make it easy to share your memories.

Send flowers to the Goodwin family.