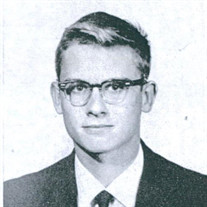 Augusta, GA - Entered into rest on Tuesday, November 21, 2020, at Holy Cross Hospital in Fort Lauderdale, Florida at 80 years of age. Michael was a former resident of North Baltimore where he was a general director of the old Baltimore Opera Company. Born John Smith, he was the son of Oscar Smith and his wife, Helen Harrison; later legally changing his name on the advice of a theatrical agent. He spent his childhood in Augusta, Georgia, and graduated from the Academy of Richmond County, class of 58. He earned a bachelor’s degree at Vanderbilt University and attended Yale School of Drama where he completed two semesters before being chosen for a role in the 1963 musical “110 in the Shade” on Broadway. Mr. Harrison later performed in regional theater productions, once on Broadway, and was cast and performed in the role of Tony in the touring company of “West Side Story.” He went on to become General Director of the Providence Opera Theatre and the Columbus Opera Company. He then became the General Director of the Baltimore Opera Company in 1988 and remained with the company in 2009 after it closed due to financial pressures. James Harp, artistic director of the Maryland Opera, said: “Michael was a complex man with a deep spirituality and a great passion for grand opera in the grand manner. “His legacy is the passion for superb opera he brought to Baltimore and realized it on the stage,” said Steven White, who conducted numerous performances at the Lyric during Mr. Harrison’s tenure. Mr. White added: “He had a great love for the bel canto style of opera and knew it deserved to be heard in Baltimore. He also took chances with operas that were not usually performed. He knew voices well and was old school in that knowledge.” He recalled that Mr. Harrison asked him to conduct “La sonnambula,” an 1831 opera by Bellini. “The next year, I got a call from the Metropolitan Opera in New York on the strength of my role in Baltimore. The Met had me conduct “La sonnambula” Mr. White said. “Professionally, I owe much to Michael Harrison.” A history of the Harrison years at the opera company said it continued to expand the repertoire and attract American and internationally renowned artist. Notable productions from the late 1990s include Sherrill Milnes in Falstaff, Diana Soviero as Madama Butterfly, The Flying Dutchman with James Morris, Chris Merritt and Paul Plishka, and the company’s first Russian opera in 20 years, Tchaikovsky’s Eugene Onegin starring Dwayne Croft, the history said. Heggie in the audience, and Norma, attended by Supreme Court Justices Ruth Bader Ginsburg and Antonin Scalia, who were both opera fans. Mr. Harrison was interred in a family plot in Westover Memorial Park in Augusta, Georgia on December 10, 2020. Thomas Poteet & Son Funeral Directors, 214 Davis Rd., Augusta, GA 30907 (706) 364-8484. Please sign the guestbook at www.thomaspoteet.com

Augusta, GA - Entered into rest on Tuesday, November 21, 2020, at Holy Cross Hospital in Fort Lauderdale, Florida at 80 years of age. Michael was a former resident of North Baltimore where he was a general director of the old Baltimore Opera... View Obituary & Service Information

The family of Michael Harrison created this Life Tributes page to make it easy to share your memories.

Send flowers to the Harrison family.