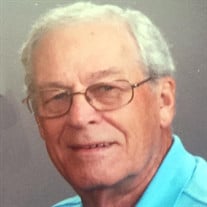 Peter F.T. Kohler Evans, GA - Peter F.T. Kohler, 80 of Evans, GA, Died 12/24/2021 at home with his wife by his side. He was born October 15, 1941, in Munich, Germany, the Son of the Late Adam and Sophie Kohler (Gropp). He was the oldest of 4 siblings. He was predeceased by his first wife, Ethel Alice Kohler who died in 2009. His Wife, Vickie Meadows Kohler who he married in 2017, survives him. He was a graduate of Evans High School Class of 1960. He graduated from Augusta College in 1972 with a bachelor of science in chemistry. He served in the US Airforce from 1961-67. After his honorable discharge, he was employed as a chemist with Columbia Nitrogen (DSM Chemicals) until his retirement in 2005. He is survived by his Daughter and Son-in-Law, Rhonda Kohler McAulay and John McAulay, Grandchildren, Jack McAulay and Matthew McAulay, Two Great Granddaughters, Aria Kinsey and Ava Smith, Brothers and Sister-in-Laws, Hans and Carol Kohler, Billy and Jeanne Gropp and Sister, Sabina Pressley and many nieces and nephews. The service will be held at Advent Lutheran Church 3232 Washington Road, Augusta, GA 30907 on Tuesday, December 28, 2021 at 11:00 a.m. with Visitation at 10:00 a.m. Burial will be a later date in a private family ceremony. Memorials may be made to Advent Lutheran Church. Thomas Poteet & Son Funeral Directors, 214 Davis Rd., Augusta, GA 30907 (706) 364-8484. Please sign the guestbook at www.thomaspoteet.com

The family of Peter F.T. Kohler created this Life Tributes page to make it easy to share your memories.

Send flowers to the Kohler family.