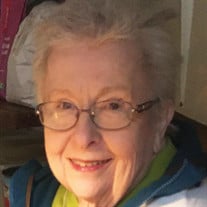 Augusta, GA – Mrs. Phylis Clara Holliday, 81, entered into rest on December 22, 2020. Phylis, the daughter of the late Thomas Carden McGuire and the late Sara Nell McGuire, was born and grew up in Atlanta, GA, attending Murphy High School. She met her husband at a Delta Tau Delta party on Georgia Tech campus, married in Atlanta, and graduated from the Barrett School of Nursing in Augusta, GA. Phylis enjoyed camping, traveling, making meals for church friends and neighbors recovering from illness, and was busy crocheting scarves for overseas soldiers and newborn babies. She was dearly loved by her family. In addition to her parents, Phylis was preceded in death by her beloved husband of 53 years: Reuben Auburn (R.A.) Holliday, brother: Douglas McGuire, and brother-in-law: Judson Delany. Survivors include her daughters: Sheryl Wendzik (Brian) of North Augusta, SC, Sara Laurie Caldwell (Chris) of Augusta, GA, and Amy James (Greg) of Harlem, GA; son Richard Auburn (Rick) Holliday of Augusta, GA; granddaughters: Alison Holliday, Madelaine Wendik, Natasia Caldwell, and Rebekah Holliday; grandsons: Neal Holliday, Miles Wendzik, Ian Caldwell, and Carden James; brother: Thomas McGuire (Ramona) and sister: Diane Delany. A Celebration of Life will be held Tuesday, December 29, 2020, at 12:00 pm, at Warren Baptist Church at 3203 Washington Road, Augusta, GA 30907, with Dr. David McKinley officiating and Pastor Joseph Humphreys providing music.  Phylis was a member of Warren Baptist Church since 1966, a Sunday School teacher, and a regular attendee of the JOY Club and an active member of the Garden Club. Phylis was the first person in her family to attend college, initially to become a missionary. But when a flu epidemic consumed the college, she helped out by tending to sick students. This newfound passion resulted in making a career change and going into the medical field. Since Georgia Baptist School of Nursing did not allow married students to attend, Phylis transferred to the Barrett School of Nursing in Augusta, GA, which did allow married students. She was also the first student to attend Barrett School, have a baby, and immediately return to school for three months with a baby (Sheryl) in a basket by her side, until graduating. She was a missionary where she was most needed and made it her life’s work to help others overcome their own obstacles. Phylis was Executive Director of United Way’s Friendship Community Center of Augusta for 31 years. She served on the Mayor’s Committee to End Homelessness, the Augusta Task Force, the Human Rights Committee, EFSP (formerly FEMA), the Depression & Bi-Polar Advisory Council, the Grand Rounds Medical College of GA, the Mayor’s Relocation of Gilbert Manor, the Prevention of Elder Abuse (Sr. Citizen), the VA Advisory Council, and the GA Mental Health Planning Council. She fought for those who could not fight for themselves by turning in Robyn Williams and others in 2005. A scholarship was created in her name and honor due to her tireless efforts as a mental health advocate, and was awarded at the Bert Yancey Mental Health Golf Tournament. In lieu of flowers, memorial donations may be made to the United Way of the CSRA, 1765 Broad St., Augusta, GA, 30904 (706) 724-5544. Thomas Poteet & Son Funeral Directors, 214 Davis Rd., Augusta, GA 30907, is honored to serve the family of Mrs. Phylis Holliday. Please sign the guestbook at www.thomaspoteet.com.

The family of Phylis Holliday created this Life Tributes page to make it easy to share your memories.

Send flowers to the Holliday family.